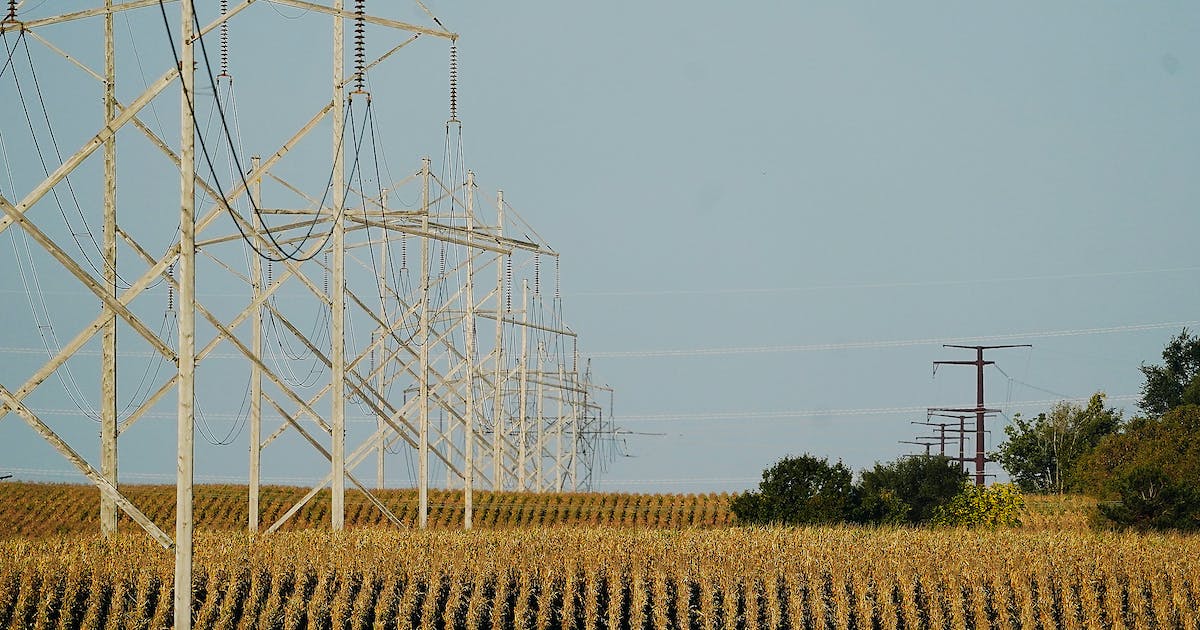 The Midwest, including Minnesota, at higher risk of power outages

Electricity demand on the Midwest grid is expected to be strong this summer, with warm weather and a growing economy sucking a lot of juice.

At the same time, electricity supplies are tightening. The result: the risk of power outages is high.

Underlying these vexing prospects is the transition of the grid from fossil to renewable energy. The power lost by retired coal plants exceeds the supply gained by new wind and solar farms.

“It’s a harbinger of things to come,” said David Sapper, intelligence manager for MISO markets at Philadelphia-based Customized Energy Solutions, which analyzes U.S. regional power grids. “These kinds of conditions could prevail for many years.”

The Midcontinent Independent System Operator (MISO) – which operates the grid in Minnesota, all or parts of 14 other states and Manitoba, Canada – estimates that approximately 33 gigawatts of coal-fired power generation capacity will be removed from here 2041.

This includes four large Xcel Energy coal-fired generators in Minnesota that together can produce 2,390 gigawatts of electricity. Their closure is scheduled between 2023 and 2030.

On paper, the capacity lost to coal through 2041 will be more than offset by new renewables in MISO: 39 gigawatts of solar power and 21 gigawatts of wind power. (One gigawatt equals 1 billion watts.)

But renewable energy does not have the constancy of fossil fuels or nuclear power plants. Thus, the power generation capacity gained by renewables does not replace one-for-one what is lost by coal-fired power plants.

As the generation mix evolves, severe weather events are increasingly playing into the delicate balance between electricity supply and demand in MISO and other U.S. regional power grids.

A brutal storm nearly destroyed the Texas power grid in February 2021 and led to natural gas shortages in Minnesota and blackouts in North Dakota. A heat wave led to widespread power outages in California in August 2020.

In MISO, “peak generation events” – network emergencies when power is limited – have become more common over the past six years.

“We’re seeing an increased importance of having resilience in our system and that’s being driven by more weather events with greater severity – and I think that’s attributable to climate change,” said Christopher Clark, president of Xcel for Minnesota and Dakota.

MISO’s summer electricity demand outlook is based in part on forecasts of above-normal temperatures, elevated storm hazards and an active hurricane season in the southern region of the grid.

“Part of this is a climate story, and we don’t want to lose sight of that,” said Allen Gleckner, senior director of clean power at research and advocacy group Fresh Energy in St. Paul. “It’s not just a story of coal-fired power plants retiring.”

Preventing climate change has been a key factor in shutting down carbon dioxide-generating coal-fired power plants. But economics also played a big role in coal’s decline.

Natural gas has become the fossil fuel of choice for power companies: its carbon dioxide emissions are half those of coal and it is generally less expensive. New wind and solar farms, already subsidized by tax credits, have become increasingly cheaper to build – and their fuel is free.

Coal and natural gas are still the main sources of electricity generation in MISO, although wind power has built a significant share, often producing more electricity than nuclear power plants. Dozens of solar projects are waiting to be connected to MISO’s network.

Fossil fuel power plants are what we call “distributable”. They can be increased or reduced on demand. Thus, MISO’s coal-fired power plants are generally credited with 90% generation capacity at MISO’s scale.

Wind farms, on the other hand, typically have a capacity of 15.5% according to MISO calculations. Solar’s capacity score is higher than wind’s because the sun shines when electricity demand peaks, but it’s still significantly lower than coal’s.

The question for MISO and the other regional networks: “Are we maintaining the right balance between dispatchable and intermittent power?” said Customized Energy Solutions analyst Sapper. “We know how much [dispatchable power] what we need when trouble starts to happen – that’s the hard truth of the situation.”

Summer could be volatile

MISO manages the electricity grid from Louisiana in the south to Michigan in the east and part of Montana in the west. Based in Indiana with an operations center in Eagan, MISO is a nonprofit organization that counts utilities and other energy players as members.

“We’ll have to be vigilant this summer with extraordinary conditions,” MISO’s Wright said.

The summer forecast wasn’t necessarily a surprise given the outcome of MISO’s annual “resource planning” or “capacity auction” in mid-April.

Generating capacity is essentially auctioned off to electricity suppliers in MISO. Many — including all of Minnesota’s investor-owned utilities — are sellers. The buyers are utilities that lack capacity.

The price of this year’s capacity auction at MISO, except in its southern region, hit a record $237 per megawatt per day, from $5 a year ago. Not only were the generation capacity estimates lower than forecast, but the electricity demand forecast was up 1.7%.

Xcel and Great River Energy – Minnesota’s largest electricity providers – benefit from these higher prices because they have long been supplied. Xcel estimates that approximately $100 million of MISO capacity auctions will be credited to Minnesota customers.

Still, due to the shortfall, Minnesota and all of MISO’s northern and central territory are at increased risk of temporary, controlled power outages, MISO warned. Although widespread power outages did not occur in northern MISO, they did occur in southern MISO during the February 2021 storm.

MISO can import electricity from other regional networks in case of emergency.

Policies from other states affect Minnesota

In most MISOs, including Minnesota, electric utilities are vertically integrated, state-regulated monopolies. Electricity suppliers must prove to regulators that they will have adequate generation capacity over the long term.

Illinois is the top MISO state where “retail choice” prevails. Electricity suppliers there are generally electricity capacity buyers, relying on MISO auctions. This is a strategy that works when capacity prices are low.

MISO has minimal authority over coal plant retirements. Electricity providers and utility commissions “ultimately have the responsibility” for knowing when to build and when to shut down power plants, MISO’s Wright said.

Yet MISO is taking several steps to address energy capacity shortfalls. This includes improving its capacity auctions so that traditional power plants get more credit for consistent availability when demand peaks.

In addition, MISO offered to reduce the risk of power shortages by preventing power providers from relying unduly on its capacity auctions.

This summer, the MISO board will consider approving more than $10 billion in new transmission projects. It’s a move that would reduce growing congestion on the grid and help get electricity to where it’s needed most.