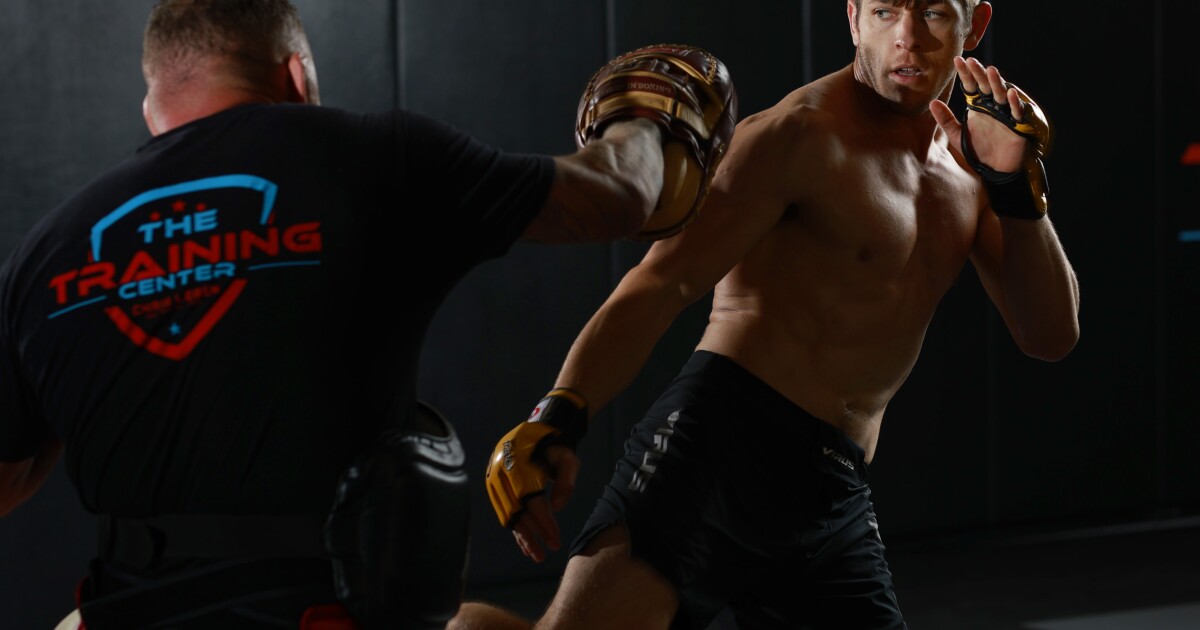 As a medical assistant working for Pain Consultants of San Diego, Jamey Lynch spends most of his weekdays helping patients cope with pain.

On Friday night in the cage at Humphreys by the Bay, the mixed martial arts fighter will be looking to dole out some.

The main event will feature Jordan Bailey against Alex Trinidad in a lightweight bout and will include the MMA debut of San Diego native Blair Chasen against Kona Oliviera in a welterweight bout.

Over the years, Cage Warriors have served as a stepping stone to the Ultimate Fighting Championship for over 100 fighters, including sports stars such as Conor McGregor, Michael Bisping, Paddy “the Baddy” Pimblett and Dan Hardy and the event Friday will be streamed live in millions of homes and online worldwide via UFC Fight Pass.

For an aspiring fighter like Lynch, a 31-year-old who trains at GameBred’s training facility in Chula Vista and former UFC star Chris Leben’s training facility in Pacific Beach, the event is a chance to showcase development and catch the attention of fans. , promoters and major career builders in the sport such as UFC President Dana White.

“The ultimate goal is to make the UFC and to perform well in an event like this is the way to achieve that goal,” Lynch said. “(Cage Warriors) helped a lot of people make that leap and that’s why I worked so hard. I’m thrilled with this opportunity.

This will be Lynch’s fourth time performing at a Cage Warriors event in San Diego.

He is coming off a (decision) victory on March 3 over Albert Lee, but says it was a loss to Richie Miranda via a first-round rear naked choke hold in October 2021 that really influenced his approach.

“What it really did was I looked within and focused on that mental aspect of my game,” Lynch said. “To be more intentional with training. Now I approach training with more focus. More locked into the details. Not just going through time. Not letting my mind drift, but focusing on what I have really need for each specific workout, because I don’t want this to happen again.

Leben, who will make his professional debut as a referee on Friday night, works daily with fighters like Lynch at the Training Center and tries to pass on the wisdom he gained during a UFC career that spanned more of a decade.

“What makes this sport so unique is that a three-round fight can go so fast and judging can be very subjective,” Leben said. “So it’s essential to train properly and be 100% prepared when you step into that cage. Cage Warriors is a great platform for fighters trying to make that climb. You have to go out there and live it all. it comes with it. It’s the only way to learn and grow.

Lynch’s entry into combat sports came after wrestling from the age of 8 through high school and then a year at Sacramento City College. After joining the Navy, he trained and served as a lifeguard while enjoying jiu-jitsu and working out at an MMA gym in Washington.

After leaving the Navy, Lynch continued to enjoy combat sports and competed in amateur MMA events while attending school to become a medical assistant. He has been working in this field for two years.

A typical day involves waking up at 5:45 a.m. for a 45-minute jog, then working with clinic patients sandwiched around workouts at GameBred and The Training Center.

Carter is a freelance writer.