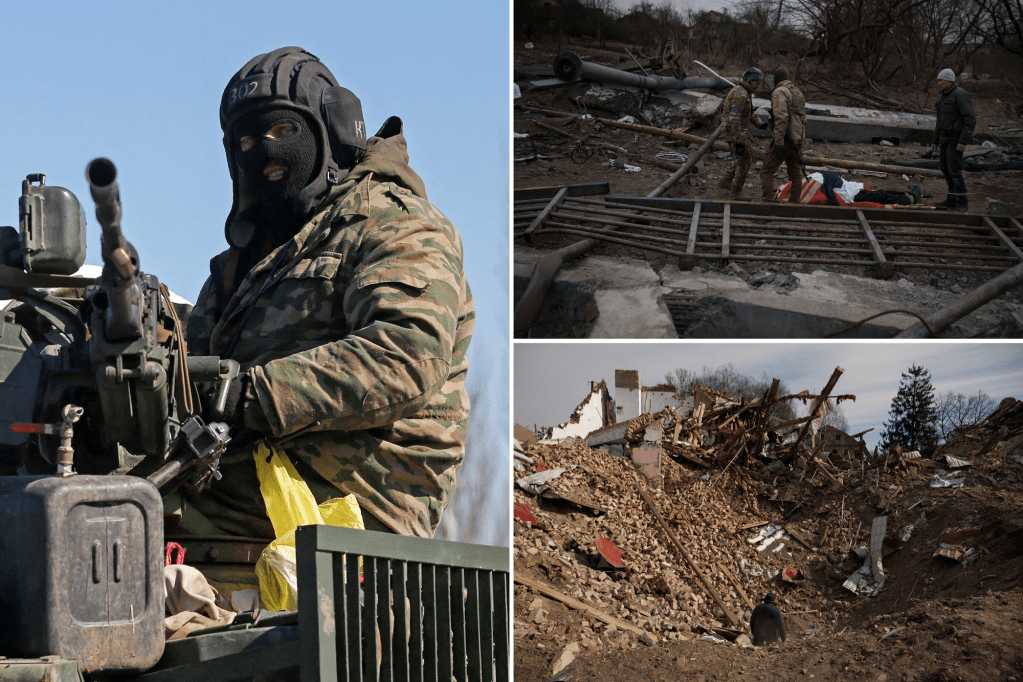 Russia continued its bombardment of various cities, launching airstrikes intensifying the bombardment outside the capital Kiev.

Air raid alarms have sounded again in almost all regions of Ukraine, according to local reports.

Russian planes fired eight missiles which hit the Yaroviv International Peacekeeping and Security Center near the city of Lviv, just 16 km from the Polish border around 6 a.m. local time on Sunday, Ukrainian officials announced on Sunday.

The IPSC is a massive military base that includes a training facility for soldiers, primarily for peacekeeping missions, which has been supported by the United States in the past.

In the strategic port city of Mariupol in southern Ukraine – which has been devastated by relentless Russian bombardment – efforts to deliver food, water and medicine to the city of 430,000 people have been prevented by another day of brutal shelling on Saturday.

More than 1,500 people died in Mariupol during the siege, according to the mayor’s office, which said the shelling had even halted efforts to bury the dead in mass graves.

Talks between Ukrainian and Russian officials trying to reach a ceasefire agreement broke down again on Saturday.

The United States pledged to send an additional $200 million worth of weapons, but Russia issued a stern warning to the United States and its allies that arms shipments to Ukraine would be considered ” legitimate targets” for Russian forces.

French and German leaders met on Saturday with Russian President Vladimir Putin in a failed attempt to reach a ceasefire, during which Putin laid down his conditions for ending the fighting: Ukraine must drop its candidacy to NATO and adopt a neutral status; recognize Russian sovereignty over Crimea; recognize the independence of the Russian-controlled regions of Luhansk and Donetsk; and demilitarize.

Ukrainian President Voloomyr Zelensky accused Russia of starting “a new stage of terror” and compared Russian soldiers to “Islamic State terrorists” after kidnapping the mayor of the town of Melitopol on Friday.

“Ukraine will stand this test. We need time and strength to smash the war machine that has come to our land,” Zelensky said during his Saturday night speech.

get latest updates in the Russian-Ukrainian conflict with the Post’s live coverage.

Zelensky said Russia would have to bomb Kiev and kill its people to take the city, ahead of a planned all-out assault on the capital as Russian forces attempt to encircle it. So far, around 2 million people have fled the city, according to the president.

“They will only come here if they kill us all,” he said. “If that is their goal, let them come.”

A convoy of hundreds of people fleeing Peremoha, a suburb about 20 km northeast of Kyiv, was forced to turn back as shelling by Russian forces killed seven people, including a child, the ministry said on Saturday. Ukrainian Defense.

Moscow has said it will establish humanitarian corridors to evacuate civilians out of conflict zones, but Ukrainian officials have accused Russia of disrupting those pathways and shooting civilians.

Ukrainian Deputy Prime Minister Iryna Vereshchuk said only nine of 14 agreed corridors were open on Saturday and around 13,000 people had used them to evacuate the country.

Russian soldiers looted a humanitarian convoy trying to reach Mariupol and blocked another, a Ukrainian official said. Russian forces now control the eastern outskirts of the city as they step up their siege on the port in a bid to establish a land corridor to Crimea, which it seized from Ukraine in 2014.

Mariupol has been without water or electricity for more than a week. Aid group Doctors Without Borders said residents were dying from a lack of medicine and draining heating pipes for drinking water.

In Irpin, a suburb about 20 km northwest of central Kiev, bodies lay uncovered in the streets and in a park on Saturday.

Zelensky attempted to rally his people to maintain their resistance against the Russian invaders. “We have no right to let up on our defence, no matter how tough it is,” he said.

On Saturday, Zelensky reported that 1,300 Ukrainian soldiers had died since the start of the Russian invasion 17 days ago, on February 24.

The Russian invaders appear to have struggled far more than expected against the fierce defense of beleaguered Ukrainian fighters, but their outnumbered and outgunned forces may be depleted by Russia’s relentless onslaught.