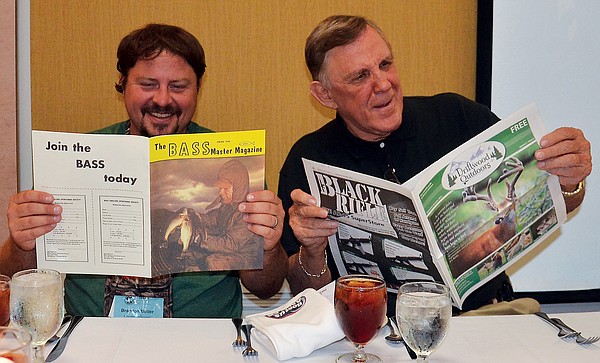 Few people can be credited with developing an entire industry. Ray Scott is one of the few.

He made bass fishing what it is today – the NASCAR of the outdoors. Scott is the father of competitive fishing and has paved the way for countless businesses around bass angling. He was larger than life, but made everyone he met feel like friends. Scott died last Sunday at the age of 88.

In 1967 Scott started the Bassmaster Tournament Trail as the first professional national bass fishing tour. A year later, he founded the Bass Anglers Sportsman Society (BASS). It was the first member organization I joined. I proudly wore the iconic logo as a sticker on my tackle box as a kid. My uncle had the same sticker on the back window of his work van. BASS had over 650,000 members at its peak, making it the largest fishing organization in the world.

I am one of many lucky souls to have crossed paths with Scott. I was able to spend time with him several times at the annual conferences of the Southeastern Outdoor Press Association. I was invited, along with three other outdoor writers, to spend a few days at Scott’s house fishing his famous private lake outside of Montgomery, Ala. It was an experience I will never forget.

The fishing was great, but pales in comparison to sitting with Scott on his back porch and listening to him tell stories about his illustrious life in the fishing industry. He talked about friends like Bill Dance, Johnny Morris, Rick Clunn and Jimmy Houston. He detailed the beginnings of professional bass fishing. It was one of those moments you dream of as a fisherman. I grew up watching Scott on TV and reading his magazines. To have the chance to know an icon that you admired and to realize that he is even bigger in person than you imagined, is special.

A remarkable achievement that Scott should be thanked for is his development of the catch and release mentality in bass fishing. Prior to tournaments and Scott’s public relations work, largemouth bass were usually found on strings. Scott began advocating for the release of the fish early on. His “Don’t Kill Your Catch” campaign began in 1972. He demanded that all anglers entering his tournaments had to weigh their live bass or they would be penalized. Scott has done a lot for fish tank vendors.

BASS released a statement following Scott’s passing. Chase Anderson, CEO of BASS, said, “Our entire organization was saddened to learn of the passing of our founder, Ray Scott. Ray’s passion and vision for bass fishing gave birth to our entire industry over 50 years ago when he founded BASS and launched the first series of professional fishing tournaments. His legacy is felt to this day and continues to influence BASS, the largest fishing organization in the world. Ray’s contributions and impact on conservation, as well as his advocacy and passion for anglers and our sport sets the standard for tournament fishing and is something we will always strive to uphold. Our hearts and prayers go out to the Scott family.

Johnny Morris, founder of Bass Pro Shops, thanks Scott for creating an opportunity for Bass Pro to exist and thrive. Morris published a letter about Scott. He wrote: “I was 22 when I first met Ray while playing in his All American National BASS Tournament on Table Rock Lake in 1970. There’s no doubt that if I hadn’t fished in this tournament, Bass Pro Shops would never have come to be. I don’t know what I would have done in my life, but I know it wouldn’t have been as fun and rewarding as having the opportunity to spend a lifetime being so closely tied to the great sport of sin. Like many others, I am forever grateful to Ray Scott!

Many of the first tournament anglers who have become television celebrities, credit Scott for giving them the path to do so. Luckily, many of them are still here to share their thoughts on the loss of such an industry giant.

Jimmy Houston wrote, “Ray’s dream did more than create a multi-billion dollar fishing industry and a sport we all love. When I look at all the people in my life that are important to me, outside of family, they’re all because of Ray’s dream. Ironically, as visionary as Ray was, I don’t think that dream included creating all of the resulting friendships. And many of those friendships have turned into success stories which, in turn, add more realism to Ray’s dream. Friends like Johnny Morris, Bill Dance, Roland Martin. I could go on until sunset and not include everyone on a list of my friends who have positively impacted bass fishing, because of Ray’s dream. Initially, the dream had nothing to do with friendships, but it was, and that’s how our industry found success.

Bill Dance wrote: “I was there when it all started. Like most things to really be successful, you start with crawling and it turns into walking and it turns into running. That’s how BASS started with Ray. It started as a dream and came true. Ray realized early on that he was onto something with tournaments. He realized how much competition would help grow the sport, the industry and BASS. The tournament track has become the proving ground, the real-time research and development environment, for everything involved in growing (and preserving) the fishery.

If there were to be a Mount Rushmore equivalent for anglers, Ray Scott would be in it. He was a really good man who built an industry through the good times. The businesses and careers that exist today thanks to his dream are countless. He is truly a legend.

Brandon Butler is an outdoor columnist for the News Tribune. Contact him at [email protected]