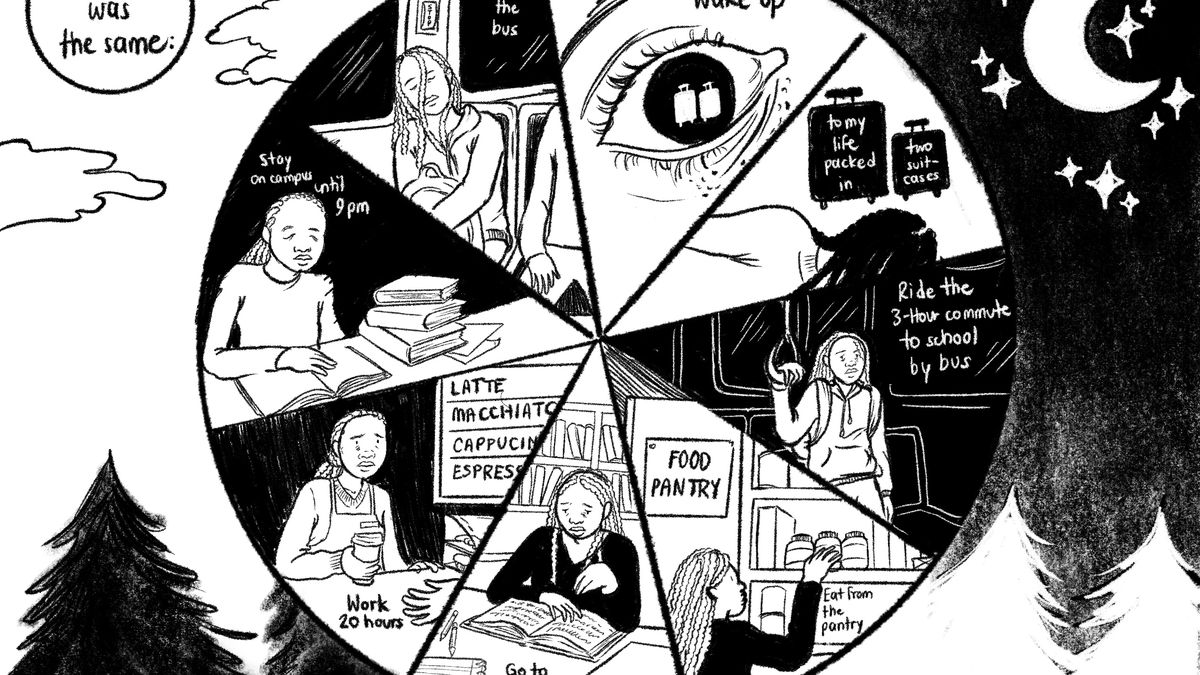 Putting a face to student homelessness, through comics

India Wynne has a stable life. They have a bachelor’s degree and a master’s degree. They own a house. And they have a steady job as an adviser in US Senator Ron Wyden’s office.

“I never thought I would be here,” Wynne said. “I didn’t think I would live this long.”

The 46-year-old Navy veteran has been through many difficult times in his life: sexual abuse and harassment during his military service, drug and alcohol addiction, untreated bipolar disorder, cancer and nearly a decade of ups and downs. -comes roaming.

Wynne said that during this time a lot of people made snap judgments about them.

“It amazes me when people look at the homeless community. It’s almost like they assume we choose to be there,” Wynne said. “There’s a story behind everyone’s situation and everyone’s pain.”

It details the lived experiences of PSU students who have been homeless or experienced housing instability. The stories explore the many ways people fall into homelessness, the stigma they endure, the challenges of earning, and their resilience as they emerge from their situation.

Their experiences are not told in a dense academic research paper. Instead, they are illustrated with comics.

She hopes the stories will reach a wider audience and change the public’s perspective on homelessness.

“Thanks to the COVID-19 pandemic, many people have realized how fragile the situation of community members is in terms of housing and lack of resources,” Ruffu said. “What these stories convey is that [homelessness] can happen to anyone.”

A Survey 2019 from PSU’s Homelessness Research and Action Collaborative found that nearly 45% of students had experienced some sort of housing insecurity, such as difficulty paying rent or overcrowding. About 16% of students said they had been homeless.

The project, which received funding from the school’s Homelessness Research Center, aimed to center the voices of BIPOC and LGBTQ people and people with disabilities. He paired 10 students with 10 graphic designers tasked with bringing their stories to life.

Portland native Marin Jurgens was one of the artists involved.

“Living in Portland, the problem of homelessness is so obvious,” said Jurgens, who is currently studying graphic design in New York. “I was really intrigued, I heard people’s stories and I was able to share those stories.”

She illustrated the story of a student and her child who became homeless after fleeing domestic violence.

Jurgens said she had a new vision for homelessness after working on this project.

“It really showed me how there are so many different ways people can fall into homelessness,” Jurgens said. “And it’s so important to share their stories to help others understand too.”

The Changing the Narrative project is a true community collaboration. The comic book series was released this month through a partnership with the Portland-based nonprofit Independent Publishing Resource Center. And it’s distributed locally by Street Roots vendors.

The comics also get the gallery treatment. They will be displayed in large format in an exhibition this weekend at the Downstairs Gallery and later this month at the PSU Native American Student and Community Center.

The research team received a huge response from students and artists who wanted to participate in the project. So they’re in the process of raising money so they can release another 10 student story comics.

And now that their story is out, India Wynne says they hope their experience will help change the face of homelessness.

“Every homeless person is just a victory story waiting to be told,” Wynne said. “Humanity is no disadvantage, and everyone deserves to be treated with dignity and respect.”