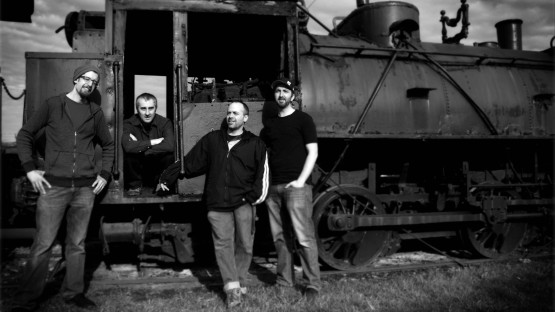 An album featuring the work of Daniel Gabelformer director of information technology for the Language Resource Center (LRC), will make its debut on June 4 at the Ithaca Festival. The album project, a posthumous tribute to Gaibel, was co-led by LRC media manager Sam Lupowitz, who plays keyboards on the record with Gaibel’s band Spacetrain.

“I feel a lot of joy that this music is available and that we’ve been able to walk into a studio and make a record that I think Dan would be proud of,” Lupowitz said. “It evokes a lot of emotions because I miss him a lot. I’m sad that I couldn’t play more music with him, but I feel very honored to be a part of it.

Gaibel, who held his post at the LRC for 18 years, died of metastatic melanoma in 2019 at the age of 45. He was a musician and music lover who studied classical guitar, as well as computer science, at Ithaca College and played in a number of local bands. As he grew increasingly ill, Gaibel asked Lupowitz to direct some of his unfinished musical projects, including this album and a children’s rock opera about a seahorse (that’s next on the agenda of Lupowitz).

The surviving members of Spacetrain, along with Lupowitz and guitarist Joe Massa, played a memorial/tribute show for Gaibel after his death to “test the waters” and see if they wanted to return to the studio to work on the album.

Although they had a computer hard drive with various raw recordings, none of the nine songs were in their final form, so they headed to a studio to re-record them. Lupowitz was able to salvage some of the existing raw recordings of Gaibel playing guitar and they are sprinkled throughout the album.

“There are times when you’ll hear another lead guitar going backwards or doubling something and that’s Dan,” Lupowitz said. And there’s a voicemail with Gaibel’s voice in a song he wrote about his brother, called “Bean.”

Most of the music on the record was written by Gaibel, who often passed bits along to bandmate Joe Gibson to add lyrics, Lupowitz said. Spacetrain members playing this weekend include Gibson, Lupowitz, Massa, Sergio Pedro and Dan Collins. Lupowitz describes their music as psychedelic rock, with elements of funk, world music and jam-band improvisation mixed in.

The album will be released on June 4 and will be available on Apple Music, Spotify and other streaming services. CDs will also be available for purchase on Saturday when the band performs at noon at the Bernie Milton Pavilion on The Commons during the Ithaca Festival. Proceeds from CD sales will be donated to the Finger Lakes Cancer Resource Center.