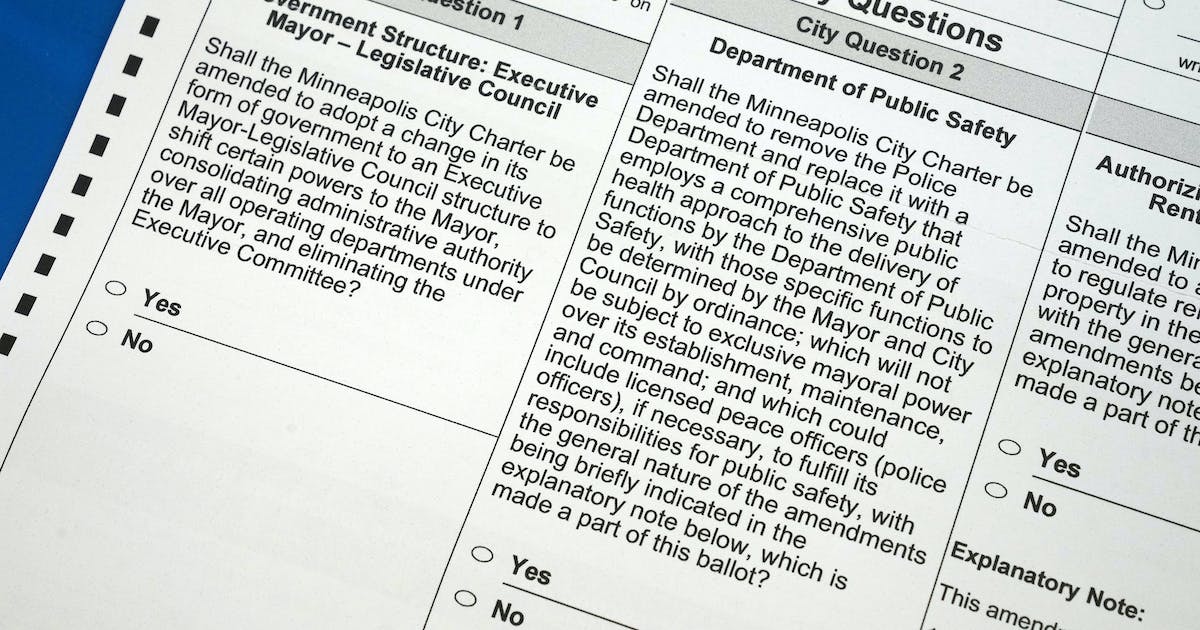 Long before the policing debate reached the Minneapolis poll, the McKnight Foundation and other prominent Minnesota foundations donated money to little-known groups for general operations and social programs. ‘equity.

Now some of those groups have jumped to the front lines in the battle over whether to replace the Minneapolis Police Department.

Several influential Minnesota foundations suddenly find themselves linked to both sides of the highly controversial public safety reform movement that arose after George Floyd was killed by police.

Foundations usually don’t seek to find themselves in the midst of public conflict, but it’s not uncommon for them to give grants to organizations that advocate for hot issues, such as reproductive rights or mining. Leaders say it’s part of supporting the community.

“Foundations fund the civic infrastructure of our community… and the community doesn’t always agree,” said Trista Harris, former president of the Minnesota Council on Foundations. “They support their grassroots work, and there will always be cases of that work that are likely to be politicized… the intention is not to support militant organizations that promote a specific policy.”

Community and private foundations cannot donate money to political candidates, according to federal tax laws. But community foundations are allowed to take a stand on the ballot and legislative measures. The Minneapolis Foundation in 2012 publicly opposed a state voting photo ID amendment and gave grants to those who organized against it, for example.

Over the past three years, the Minneapolis Foundation, the McKnight Foundation, and the St. Paul & Minnesota Foundation – among the state’s three largest foundations – have provided grants to TakeAction Minnesota Education Fund, Black’s tax agent. Visions and Reclaim the Block. . These two groups are part of the coalition behind Yes 4 Minneapolis, which this year proposed the ballot question to replace the police department with a public safety department.

The foundations also funded nonprofits that are now part of coalitions opposed to the amendment. But in both cases, philanthropic dollars have gone to operations or efforts of nonprofits such as tackling climate change, not campaigns for or against the measure of the ballot.

Leili Fatehi, of All of Mpls, who opposes the replacement of the police department, said the foundations should support work leading to reform and social justice, but organizations such as Black Visions and TakeAction “have gone in. a very political direction that is not tied to the type of community engagement… which is what I think these foundations were looking for, ”she said. “I hope the foundations will look into this.”

But Susie Brown, who heads the Council of State Foundations, said philanthropy often funds a wide range of nonprofits that can take a stand on an issue at any time.

“An organization may be very much in the spotlight right now for its position on an issue, but without a doubt, it does a lot of different things – research, community meetings, organizing – and those things are funded by foundations. all the time, “she said.

At McKnight, a private foundation based in Minneapolis, leaders did not fund organizations for their advocacy work, spokeswoman Na Eng said. And, she said, grantee positions on the public safety debate are not a reason for McKnight to renew or cut funding. Recipients, Eng added, strive to advance foundation-supported goals, such as climate leadership and building equitable communities.

At the Minneapolis Foundation, more than $ 100 million is distributed annually to hundreds of groups.

“We support community empowerment and we support organizations that work on issues of importance to the community, that involve people who have not been engaged in the democratic process or public debate, and often these things intersect with big things happening in the community, ”said Chanda Smith Baker, Minneapolis Foundation impact manager. “We’re always funding people who are on different sides of the issue or different sides of the approaches, but who are committed to making this community at its best.”

Floyd’s murder last year sparked a global racial calculation, and since then the state’s philanthropic sector has mobilized around racial equity by increasing funding, distributing grants more inclusive and by increasing the diversity of staff and board members.

Black Visions and Reclaim the Block are not registered nonprofits, but they report to tax agent TakeAction Minnesota Education Fund, which also sponsors four other groups. The fund raised $ 35 million at the end of June 2020, up from $ 3 million the year before.

In 2019, a climate and racial equity fund launched by the city, the Minneapolis Foundation and McKnight donated $ 25,000 to Black Visions for climate equity. That year, the St. Paul & Minnesota Foundation donated $ 50,000 to TakeAction’s “Organizational Transition” fund.

TakeAction advocates for many issues ranging from climate action to healthcare and helps small groups thrive, which the foundations have supported, spokeswoman Kenza Hadj-Moussa said. “McKnight is a monster and I’m sure a lot of their grantees are on different pages for this one,” she said, adding that grant decisions are unaffected by this year’s campaign. “These philanthropic institutions are very large and they move forward very slowly while a campaign moves forward very quickly.”

Since Floyd was killed, Black Visions and Reclaim the Block have led the push for reform, staging the rally where nine city council members vowed to “begin the process of ending” the police service. Both groups are among more than 50 behind Yes 4 Minneapolis and among its top local donors.

But both groups have done other work, Harris said, and the grants are for programs or operations, not for endorsement by foundations for or against the ballot issue.

“Foundations are supporting them to ensure that they continue to exist and continue to do this really important grassroots work, even if there is disagreement over the policy positions taken by these organizations,” said Harris, now president of FutureGood, a consultancy group.

McKnight and the Minneapolis Foundation have also helped nonprofits on the other side of the debate: the Northside Economic Opportunity Network (NEON), for example, is part of A New 612, which opposes replacing the service of police. McKnight gave NEON $ 1 million this year for operations and capital support and the Minneapolis Foundation gave $ 50,000 to black and African entrepreneurs as well as support groups like the Hennepin Theater Trust, also in the coalition opposed to the measure.

“I actually like the fact that we’re not funding one side of the problem, and I think that’s a good place to sit down,” said Smith Baker. “We support leadership in public debate and we provide ways for people to organize themselves around issues that matter to the community.”

Fundraiser against domestic violence from the Astros Foundation