The Palestine Advocacy Project PalAd has launched a campaign in the United States exposing Israel’s violations of the rights of Palestinian children in the occupied Palestinian territories.

PALAD said: “After much work and research, the Palestine Advocacy Project unveils the PalAd Data Visualization project, an amalgamation of over 20 years of statistics on the detention of children in Palestine.

According to DCI Palestine, 500-700 Palestinian children between the ages of 12 and 17 are detained and prosecuted each year by the Israeli court. Since 2021, no detention number has been released as the Israeli government has refused to provide this information.

Data from the past 20 years is evidence of the abuses suffered by young Palestinians by the Israeli government and the Israeli Occupation Forces (IOF), as well as the crass monitoring of laws that should affect minors.

The visual conceptualization of the data clearly shows the large number of children detained, abused and deprived of due process by the IDF and the Israeli government. Armed with this information, we are in a position to better defend the rights of these children and to work to end unjust and inhuman treatment.

The project also contains testimonies of children detained by the IDF.

Testimony of Khalil Zaakiq, arrested at 1 pm: “Around 2 am, someone knocked on the door. I woke up and saw a lot of soldiers in the house. They said we should all sit on the living room couch and not move. The commander called Uday, my older brother told him to get dressed and informed him that he was under arrest. It was the third time they had arrested him. My father was also once under arrest. Suddenly they told me to put my shoes on too and go with them. 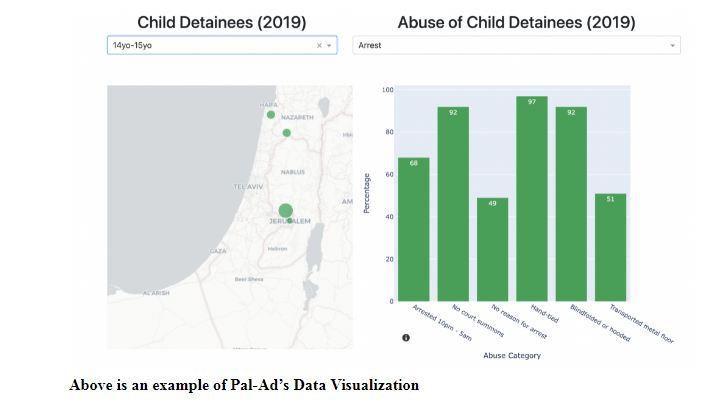 They took us out of the house, tied our hands, and covered our eyes. We went like that on foot to the base of Karmei Tzur. There they sat me on the floor with my hands tied and my eyes covered for about three hours. At around 5 a.m., they transferred us to Etzion. On the way, in a jeep, they hit us, they slapped me.

In Etzion, I was sent to be checked by a doctor. He asked me if I had been beaten and I said yes. He didn’t do anything, he just checked my blood pressure and said I could resist questioning.

My interrogation began at 8 a.m. They asked me to tell them which children were throwing stones. I said I didn’t know, so the interrogator gave me a slap in the face. The interrogation lasted four hours. Then they put me in a dark room for 10 minutes and then took me back to the interrogation room, but now they only took my fingerprints and put me in a holding cell for an hour. . After an hour, Uday and I were transferred to Ofer Prison. I signed a confession, neither on myself nor on the others.

I got out after nine days because I wasn’t guilty of anything. My parents had to pay a deposit of 1,000 shekels.

My little brother, who is 10, has been really scared ever since. Every time someone knocks on the door, they wet their pants.

Legal warning: MENAFN provides the information “as is” without warranty of any kind. We do not accept any responsibility for the accuracy, content, images, videos, licenses, completeness, legality or reliability of the information contained in this article. If you have any complaints or copyright issues related to this item, please contact the supplier above.