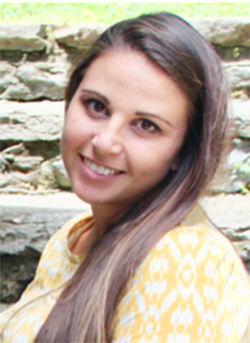 Kaleigh Rougraff, a kindergarten teacher at Newport Elementary School, has been named Kentucky State VFW Teacher of the Year.

Rougraff, in her seventh year at Newport, was named Elementary School Teacher of the Year and was honored for promoting patriotism, civic responsibility, American flag etiquette, and Americanism locally, regionally, and nationally. . Winners were also announced in the high school and middle school teacher categories.

“Kaleigh is an amazing kindergarten teacher,” said Newport Elementary School Principal Matt Atkins. “Each school year, she develops an inclusive and positive classroom culture where every student knows they are important and loved. She has very high expectations for every student and places a strong emphasis on respect and caring for everyone. Kaleigh also develops strong and lasting relationships with her students’ tutors, ensuring a partnership between school and home, and she truly deserves this recognition.”

While other Newport teachers have already won local and regional VFW awards, Rougraff would be the first statewide winner. She was nominated for the award by Molly Wesley, co-ordinator of the Newport Primary Family Resource Center, and Amanda Barbour, the school’s behavioral intervention specialist and former winner of the local VFW Teacher of the Year award.

“While I am completely flattered, gracious and honored to receive recognition, this award for me is more of a nod to all the hard work we have put into our Newport school, district and families in my time. . in Newport and long before I arrived,” Rougraff said. “During my first year of teaching, we created a group of teachers with a common goal: change.”

“Since then, we have cultivated a school-wide culture of respect and positivity,” she said. “We have created a rigorous and supportive learning environment, as well as a resourceful haven for our families. I firmly believe that every teacher and staff member at our school deserves an award or recognition like this, and I’m just proud to represent them.

Originally from Indianapolis, Rougraff came to the area to play volleyball at Xavier University. Originally a major in English and communication, she turned to education in the last semester of her senior year after taking an early childhood literature course as an elective.

“I realized teaching was exactly what I wanted to do,” she said.

Rougraff landed in Newport as a student teacher and has been with the district ever since.

“My passion is working with children,” she said. “I love seeing them explore, learn social skills and develop their abilities. In kindergarten, they come to us with the ability to hold a pencil and let us read, write several sentences and represent problems with mathematical equations. amount of growth that this student age is capable of is absolutely fascinating and utterly rewarding.

Winning a civics award has a special meaning for Rougraff.

“One of the most wonderful things about being a teacher at Newport is the diversity of the student population,” she said. “In my classroom, we have many different languages, cultures, beliefs and values, just like the United States as a whole. We focus on creating an atmosphere of mutual respect while recognizing that our differences make us valued members of society.

“I think that’s exactly what citizenship looks like in a kindergarten classroom,” she added. “The skills they learn in our classroom are the foundation through which they will discover their role in shaping the future of our country.”

Rougraff said she was also especially honored to win the award during a time of tremendous challenges faced by teachers due to the COVID pandemic.

“Building relationships with students and teaching them grade-level skills through Google-meet wasn’t something I thought I would do, nor was it an easy task,” she said. . “It pushed us towards our creative and technological potential. It has been frustrating, long, uncertain and instructive. Receiving this award at this time is a good reminder that I am making a noticeable difference.

National Cupcake Day is a sweet fundraiser for Orillia OSPCA