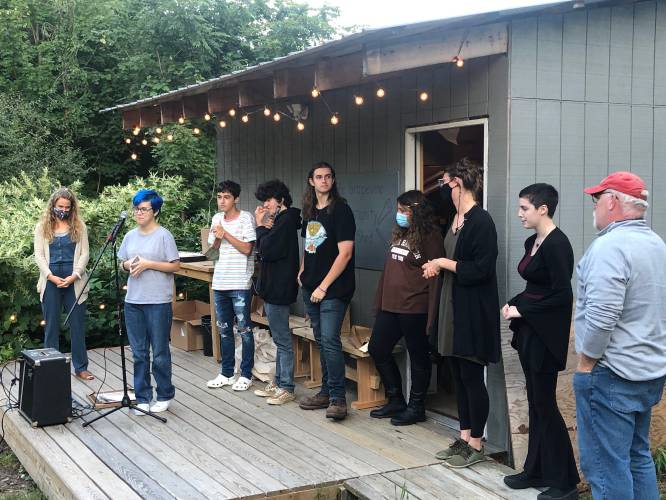 The continued impact of the Grapevine Family and Community Resource Center on families, teens, children and individuals of all ages in the area would not be possible without the many Grapevine volunteers, who dedicate hours of their time and of their energy to the many programs and initiatives offered.

On September 2, The Grapevine hosted an outdoor volunteer appreciation event at its Antrim center. They paid tribute to the volunteers and their families for giving so generously of their time and for the impact they have had on those served by the community resource center.

â€œVolunteers are the heart of Grapevine and our Teen Center. Without them, we wouldn’t exist! Gallagher said.

A very special award went to the family of Ben Pratt, longtime board member and one of the driving forces behind The Grapevine’s creation. Kristen (Vance) McCormick, former director of The Grapevine, said: â€œBen Pratt! I really don’t know what we would have done without him at the Grapevine – from the very beginning, every step of the way, any work that needed to be done.

Pratt was one of the early organizers of Grapevine’s Community Wood Bank, which served hundreds of families in the area in cold and difficult weather. Pratt passed away recently, but The Grapevine wanted to recognize his years of dedication and commitment by dedicating the pyre in his honor. His family was present to accept a woodburned plaque that read â€œThe Ben Pratt Community Wood Bankâ€, which will hang in the shed.

â€œBen embodied the spirit of selfless giving. He has presented himself in so many ways for our organization and the community and we are honored to dedicate our Community Wood Bank in his memory, â€said Gallagher.

Roland, who runs the Avenue A Teen Center, had many people to thank for their selfless help with the many programs available to local teens.

â€œAt Avenue A, over 70 volunteers help run our programs for teens! In addition to sharing their skills and talents, they are incredible mentors and local role models for our youth, â€said Roland.

Grapevine volunteers support all aspects of the community resource center – from the board and advisory groups that provide vision and guidance, to the teen center volunteers who take the time to get to know local youth by playing a game, offering advice and solving difficult problems.

â€œWe are so grateful for their time, love and leadership and we had so much fun honoring them during our celebration of volunteers! Said Gallagher.