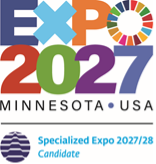 MINNEAPOLIS, Feb. 17 2022 (GLOBE NEWSWIRE) — As Minnesota grows in support of hosting a specialized global health expo in 2027, members of the official bid committee head to Dubai for the 2020 World Expo next week. Minnesota USA Expo 2027 President and CEO John Stanoch and Bloomington Mayor Tim Busse are part of the delegation that will meet with representatives from different countries to advance our state’s bid to bring back an Expo. universal on American soil for the first time in 40 years.

Minnesota Expo USA 2027, themed “Healthy People, Healthy Planet,” would be the first-ever expo focused on health and wellness issues facing people around the world. In a post-pandemic world, the subject proposed is more relevant than ever. It would operate for three months, located at a site to be developed in Bloomington, Minnesota, near Mall of America.

“The purpose of our trip is to help raise awareness among people in Minnesota and the United States about what World’s Fairs are, and how hosting one here will showcase innovations and discoveries from around the world related to both to keeping our people and the planet we live on healthy,” said John Stanoch. “We plan to meet with 40 countries and advocate for our bid at Expo.”

Minnesota is known for its leadership in public health, its research and health advocacy institutions, and its many business leaders in medicine, medical devices, water purification and food production. It is home to the world-renowned Mayo Clinic and the University of Minnesota, whose researchers are at the forefront of the global fight against HIV/AIDS, Ebola and Zika.

Four other countries have also submitted bids to host Specialized Expo 2027: Thailand, Serbia, Spain and Argentina. The 18-month campaign process began in December, with a presentation to the General Assembly of the Bureau International des Expositions (BIE). The organization, made up of 170 member countries, will vote in the middle of next year to decide which of the five countries will host Specialized Expo 2027.

About the Minnesota Specialty Expo 2027 Campaign:
A ‘specialist’ exhibition is a scaled-down version of a ‘global’ exhibition, which is currently taking place in Dubai, but its importance is just as impactful. Minnesota was selected as an official U.S. bid in June 2021, and the international campaign is a joint effort between the bid committee and the U.S. Department of State. They work with the public and private sectors to develop a winning campaign strategy. A Minnesota-based group submitted an earlier bid for an event in 2023 and that work formed a solid foundation for the current bid. The last specialized World’s Fair held in the United States was hosted by New Orleans in 1984.