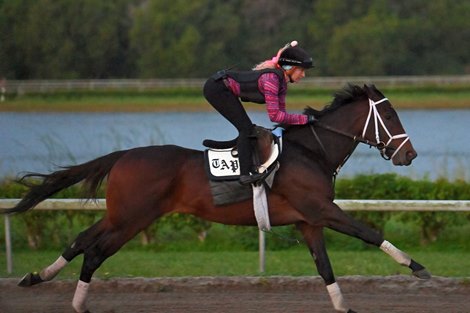 millionaire son of in mischief ran five furlongs in 1:00.90 on a fast main track at Palm Beach Downs for Hall of Fame trainer Todd Pletcher, placing third out of 15 horses.

It was the seventh job for Life Is Good since its 5 3/4 length triumph at the Nov. 6 Dirt Mile in Del Mar, the last six after arriving in mid-December in South Florida after a first breeze at WinStar. Kentucky Training Center. The Pegasus will be his first race at 1 1/8 miles.

“It was another great breeze. He looked awesome, moving really well, in hand all the way,” Pletcher said. “That’s kind of what we’ve seen every week. Just great action and does it effortlessly. We couldn’t be happier with how it turned out.”

With five wins from six career starts, his only loss coming by a neck in the seven H. Allen Jerkens (G1) stadiums on August 28 in his first race since joining Pletcher, Life Is Good will debut in the Gulfstream next Saturday in a hidden face with Knicks Go, winner of the Longines Breeders’ Cup Classic (G1).

The Repole stable Intrepid , also among the 17 Pegasus guests, completed a half-mile on Saturday in: 48 4/5 seconds for Pletcher. Fearless is coming off a four-length triumph in Gulfstream’s Harlan’s Holiday Stakes (G3) on December 18, and the trainer says a decision is forthcoming on whether he will race in the Pegasus or the Charlatan $150,000 presented by Hill ‘n’ Dale Farms in Xalapa (G3), formerly the Fred Hooper, running one mile.

Pletcher’s other Pegasus Turf competitor, Repole Stable’s Never surprised , worked a half mile on Saturday in :49.66. Never Surprised enters the race with back-to-back victories, including the Dec. 27 Tropical Turf Stakes at Gulfstream, the same race Colonel Liam used as the springboard for his victory over Pegasus.

“With Colonel Liam, we wanted to do a bit more,” he added. “He hasn’t raced in quite a while so we wanted to give him another good job, which we did, and it looks like he’s fit and ready to go. We hope he can race too. although last year.”