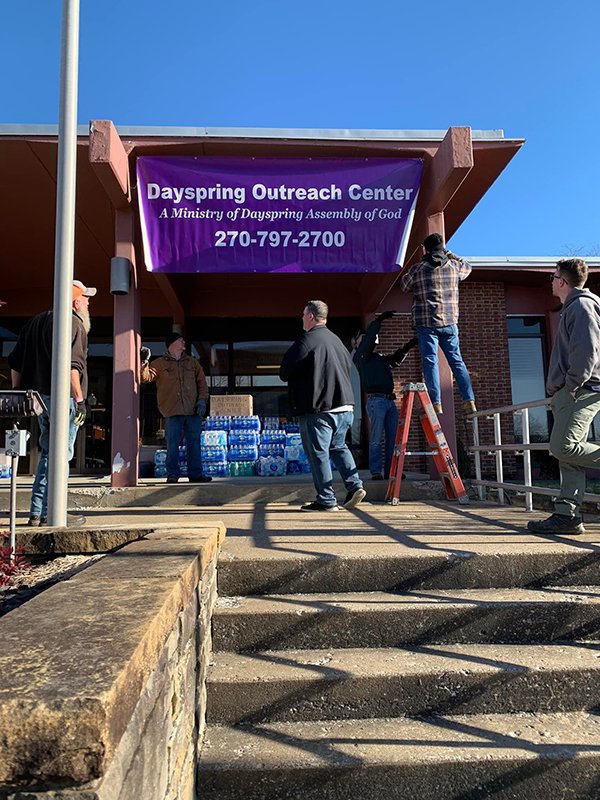 Kentucky by Heart: Recent tornadoes in western Kentucky bring out the best of our fellow Kyians

By Steve Flairty
Columnist of NKyTribune

The brutal December 10-11 intrusion of ferocious weather damage that plagued the lives of western Kentucky communities was terrible, but the disaster also brings the best of its fellow Kentucky people. Here are a few examples that I have found while browsing the newspapers and listening to friends, although they may well represent only a few grains of sand in a large sandbox; there are many more stories that could be told, with developments to come for the future.

I’ll start with my own community in Woodford County, where cattle breeder Greg Dotson raffles a quarter of beef from his stock to raise money for tornado relief. So far, the raffle proceeds total over $ 63,000. Someone donated $ 5,000. The County’s Main Pantry provided 5,108 pounds of food as well as personal care items in an incredible county-wide effort, where schools, fire stations and local first responders have helped fill the buses with data supplies.

According to an article in the Lexington Herald-Leader, Bremen, a town of a few hundred people in Muhlenberg County, asks people to call before donating else because they have received so much support. That said, one official said they were “not turning anyone away or anything.” Mayor Allen Miller is leading the logistics of the city’s fire department response. The reporter noted that on the day he was there, “excavators and other commercial equipment were seen coming and going from city limits as volunteers showed up to help clean up and transport the debris.” . As of December 14, eleven residents had died in the 4,000-strong fire department, a particularly hard blow to the citizens of such a small community.

Lo-Rae’s Shaved Ice, a Nicholasville business, loaned their concession trailer to use to serve meals to those affected in Mayfield. The Kentucky Veteran & Patriot Museum received supplies at their Wickliffe site and drove them to Mayfield to disperse them to the Northside Church of Christ. Camner Church in Hart County opened its youth building “to help anyone in the community who needs it due to recent tornado damage.”

The Kentucky Humane Society is helping to unite the animals in the tornado damaged area with their owners and is accepting financial donations to help in the effort. Infinity Farms, a farm-to-fork restaurant in the town of La Center, Ballard County, is providing food and other items to those affected. Nearby, Cayce Baptist Church distributes monetary donations to affected individuals and families through their CBC Tornado Relief Fund, 41 Holly Circle, Fulton, Kentucky 42041.

Brandon and Danielle Schabel of Jeffersontown found a photo of a toddler sitting in the lap of a man driving a tractor. Thinking it was something important to someone, the Schabels posted the photo to Facebook and within 45 minutes it was identified as belonging to someone from Madisonville, about 150 miles away. Brandon discovered the toddler was now around 30 years old after the two made contact.

Meagan Kubala’s children from Erlanger would save part of their allowance all year round to donate to a good cause. When the Kentucky tornadoes hit, they knew what the cause would be. They took their money to Walmart and bought items to send to those affected.

Duncan Prescription Center, a Mayfield pharmacy, lost everything in the recent tornado. With the help of many supporters, they were able to move to a new location and opened their doors to serve customers within 83 hours. A spokesperson for the store said, â€œIt wouldn’t have happened without the massive workforce of each of our employees, their families and close friends who have never left us. We are eternally grateful!

Laura Shine, a 3-6 afternoon host on 91.9 WFPK radio station in Louisville, has announced that there will be a concert on Jan. 1 to raise money for Muhlenberg County Relief Funds and the Western Kentucky team. The event, which will take place at the Burl, Lexington, will be broadcast live simultaneously by Oh Boy Records. It will present performances by artists with close ties to the region. More details are available at wfpk.org.

Steve Flairty is a teacher, speaker, and author of seven books: one biography of Kentucky Afield host Tim Farmer and six of Kentucky’s Everyday Heroes series, including a children’s version. Steve’s â€œKentucky’s Everyday Heroes # 5â€ was released in 2019. Steve is a senior correspondent for Kentucky Monthly, a weekly columnist for NKyTribune, and a former member of the Kentucky Humanities Council Speakers Bureau. Contact him at [email protected] or visit his Facebook page, “Kentucky in Common: Tribute Word Sketches. “(Photo of Steve by Connie McDonald)

the Assembly of God in Spring, in Dawson Springs, established the Dayspring Outreach Center to meet the needs of the city’s residents after the devastation. An outreach spokesperson said: â€œThe DOC community has worked tirelessly over the past week to assist families in need both through clean-up and recovery efforts at reception sites and through the creation of a distribution center at 119 S. Main Street to supply essential items to those in need.

Chris Holtmann, the Ohio State basketball coach, is from Nicholasville. He asked, via a tweet, that OSU fans can help raise funds for the Kentucky United Telethon. He praised Great Britain coach John Calipari for the efforts his team and supporters are making to help.

Called the ‘Stuff the Bus’ campaign, more than 30 Kentucky school districts participated in sending supplies, including children’s toys, to Morgantown, Butler County, for storage and use in the following months for relieve tornadoes. About 70 buses, trailers and vans transported the items donated on December 20. The initiative started out simple when Greenup County Superintendent Traysea Moresea called a general contractor from Vanceburg, Ky., And asked how they could work together to offer help.

Mayfield Health and Rehabilitation was directly affected by a tornado. The heroic actions of the staff members likely saved lives or protected the 74 nursing home residents from serious injury. Here is a list of the noble deeds of Kentuckians, according to an article by Lexington Herald-Leader reporter Beth Musgrave:

â€¢ workers went from room to room, “assessing patients and moving them to areas of the facility that were not damaged”

â€¢ a nursing assistant spent most of the night helping with the transfer of residents and came back at 5.30am to ask which nursing homes still standing she could go and help next.

Linda Blackford, of the Herald Leader, wrote about Natalie Winn, teacher, minister for youth and mother. She led a Graves County effort to first identify all those who were directly affected by the tornadoes and second, Natalie explained, “to make sure that they (their children) have had the best Christmas they have. have ever had “. She, along with a church member and family resource center coordinators, found 375 families with about 1,000 children in total. Donated toys and gift cards were distributed at the Graves County High School gymnasium, and many volunteers helped. Natalie’s efforts were separate from First Lady Britainy Beshear’s toy initiative, one primarily focused on helping people staying in state parks.

While we may always find people of a less compassionate nature among us, the state is a â€œKentucky by heartâ€ kind of place that we can rightfully be proud of. I hope that a sense of oneness that we now demonstrate can filter through all areas of our life.