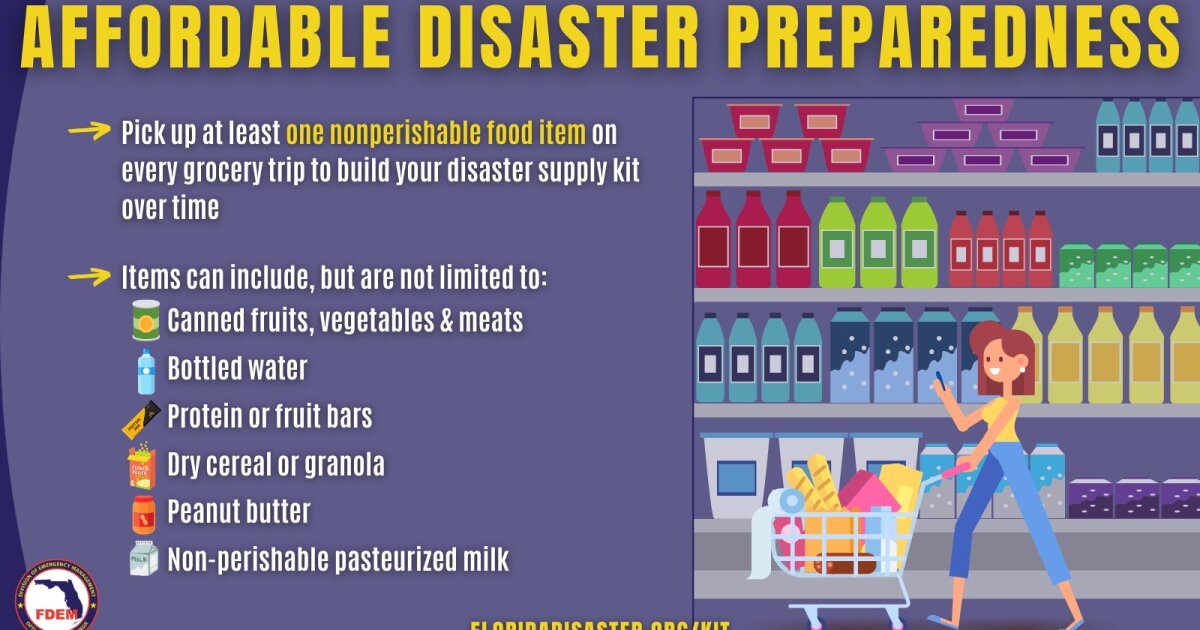 Hurricane preparedness is expensive. Emergency managers and community leaders are looking for a solution

Last June, Valencia “Vee” Gunder’s organization, The Smile Trust, held its first hurricane preparedness event. Gunder and his team prepared 200 kits filled with supplies such as water, battery-powered fans and first aid kits. They planned to give them to families near his Miami headquarters.

“We ran out of supplies,” laughed Gunder. “People were asking, when are you all coming back?”

People usually know the list of things they’re supposed to have stored up for a storm, Gunder explained. But for low-income people and people in marginalized communities, getting these supplies is sometimes an elusive goal. She is just one of many people in Florida working to make hurricane preparedness more inclusive for everyone, regardless of cost or accessibility.

For Gunder, she considers much of the traditional hurricane preparedness advice Floridians hear every year to be outdated. She feels it is too inaccessible for people with no money to spare or transportation to find these goods. “Go get food for so many people for so many days…it’s easy to say when you’ve got groceries in all the right places,” Gunder said, “so when someone comes up with a list of supplies you must prepare, it must also go through a lens of class, access and mobility.

She worries every year for those who will inevitably be caught without crucial supplies after a storm. “South Florida is playing hurricane roulette,” she said, “and we will be caught sliding. I can only imagine the amount of harm that will result.

The Federal Alliance for Safe Homes (FLASH) national survey found that Americans are looking for ways to prepare on a shoestring budget. Nearly 30% of respondents said they would be willing to spend $50 or less to prepare for hurricanes. That’s double the number for 2021. About 57% say they plan to prepare for this hurricane season, compared to 80% who responded in 2021. Only 47% plan to strengthen their home before a storm, compared to 65 % in 2021.

The FLASH survey concludes that this change “may reflect a tightening of family budgets”. Obviously, preparing for a storm that may or may not come has become a lower priority for many Americans.

David Peaton wants emergency managers to make up for their time. Peaton is the assistant director of emergency management for Alachua County. “I think we’ve been talking about hurricane preparedness to the public the same way for so long. For decades we have been giving the same message to people and we have to understand that not everyone absorbs information like they used to because they don’t have the same amount of resources,” he said, “ so that’s the problem, we keep sending the same message and yet the disasters are getting bigger and bigger.

Peaton wants people to focus on what he calls “common sense preparation,” which are simple, inexpensive alternatives to the typical bulk purchase of hurricane supplies before a storm hits. For example, instead of buying bottled water, he suggests saving soda and juice bottles, filling them with tap water, and storing them long before the threat of a storm hits. arrived. He also advocates rotating extra foods in and out of your pantry. Instead of spending a large sum of money to buy a seven-day supply of food that you may or may not touch this year, he said to buy a little more at each grocery store, use it, then restock it. over time. Peaton also said keeping your yard free of debris and other large loose objects is a cost-free way to reduce the risk of damage to your home during a storm.

Peaton is especially concerned for those who cannot afford to evacuate. For many, refueling, finding a hotel, etc. is a cost they can put on their credit card and move on. “But for a lot of people, they just can’t afford to pay for it.” This makes personal preparation even more important if they won’t be able to weather the storm.

“We want personal security to be something independent of income and independent of financial need,” he said. Peaton also stresses the importance of food banks and other local help during a hurricane scenario. They often help fill in the gaps when people can’t do their own food shopping before or after a hurricane. “Our food banks don’t get enough credit,” he said.

Robin Safley is the executive director of Feeding Florida, an association of 12 food banks that serve all 67 counties in Florida. The organization works with smaller local partners to distribute the food. Florida Food plays an important role before and after a hurricane and works closely with the Florida Division of Emergency Management.

“In the blue sky, we distribute six million pounds of food every week. We have the capacity to respond to a natural disaster by increasing up to 300% in a short period of time,” Safely said.

Safley said they are focused on distributing shelf-stable foods that don’t require cooking before a storm, so people can stock up. In the process, they distribute MRE, or Meals Ready to Eat. “We want to stabilize the family once they get back to their area, we come in with this food so they don’t search daily,” she said.

“The family that can’t afford to leave has more time to get to where they were before the storm,” but Safley wants Floridians to know they’re not alone. “There will be food; You should do a lot to prepare, but if you find yourself in need, we’ll be there on the other side of the storm. While large organizations like Feeding Florida can effectively serve large numbers of people after a hurricane, smaller scale operations practicing community hurricane preparedness can also have a significant impact.

When Hurricane Irma headed for Florida in 2017, Gunder was looking for a way to bring aid to his own community in Miami. She had been doing climate advocacy for many years, but realized that “we needed more than just advocacy. We needed an alternative for our communities to respond to after a storm. It all started at home, just a small operation. But in four or five days, Gunder said The Smile Trust worked with 10 organizations in 18 communities, ultimately serving around 23,000 families. This type of grassroots effort evolved into the Community Emergency Operations Center, or CEOC.

The CEOC is a model of community response to hurricanes. Gunder took the model and trained other organizers on how to become first responders during a storm. For example, Gunder uses “welfare checks” during a natural disaster, in which organizers call local residents and request the supplies they need, then contact organizations on the ground to deliver those supplies.

For Gunder, the most effective way to help is simply to give people what they need. “The best way is to bridge the gap,” she said.

A combination of government and local assistance may be the answer to this gap in hurricane preparedness. Nkosi Muse is in her third year of doctorate. student at the University of Miami studying climate risks, especially for vulnerable communities. He also sits on the City of Miami’s Climate Resilience Committee. He says community action such as sharing supplies, information and hurricane education can have a more immediate impact than something at the municipal level.

However, he also stressed the need to lobby local governments and continue to push for better resources for those in need. “Keeping your foot on the accelerator, making sure we’re heard, that will eventually change.” Nkosi said this is even more important when it comes to long-term climate. “Climate change and hurricane preparedness now go hand in hand as these storms get stronger and stronger.”

Ultimately, emergency managers and community organizers want people to feel empowered by the information before a storm arrives. Once you can stock up, make a plan, Peaton said. Knowing who to contact before and after a disaster for help and signing up for alerts from your local emergency management are essential steps. “The first thing you can do is educate yourself before disaster strikes,” Peaton said. “It won’t cost you a penny.”

Resources are running out for migrants bused to DC – NBC4 Washington