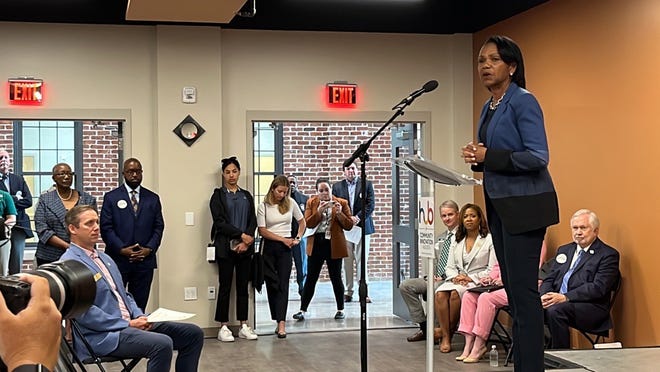 About 150 people, including former U.S. Secretary of State Condoleezza Rice, gathered at the new HUB for Community Innovation campus on Tuesday to celebrate the completion of construction of the $33.5 million community resource center.

Located at the corner of Chafee Avenue and Fenwick Street, bordering the Medical District and Harrisburg, the HUB for Community Innovation’s two-building campus will serve as the home base for five local nonprofit organizations. In one building, known as HUB West, Augusta Locally Grown, Augusta University Literacy Center, Harrisburg Family Health Care and RISE Augusta, a dropout prevention program, will expand their offerings to the public. A second building, known as HUB East, will be the new CSRA Boys & Girls Club headquarters.

Rice, vice chair of the Boys & Girls Clubs of America board of directors, praised the work that will be done at the HUB and the local support the project has received.

Continued:Some signs of recovery in Harrisburg as HUB prepares to open, helping

In what was once a grass field, construction of the buildings officially began just six months ago, said Shell Berry, president of HUB Augusta Collaborative. Both facilities are mostly complete with some final interior touches such as door handles and flooring.

Berry thanked the community and funding partners for their support and leadership and announced the closing of a New Marketplace Tax Credit transaction contributing $4 million towards HUB construction costs. The federal tax incentive program promotes community development and economic growth by allowing investors to receive tax credits in exchange for equity investments in low-income communities, according to the US Treasury Department.

While many organizations have worked in surrounding neighborhoods over the past decade, Berry said opening the HUB with dedicated space will allow nonprofits to expand their offerings and availability to the community.

“By bringing existing resources and nonprofits together in one place, we can begin to build equitable access to all the essentials of a thriving community,” she said.

Representatives from Augusta Locally Grown gave a tour of their new headquarters, which includes a large commercial kitchen for their vendors and community members and space to hold educational classes on healthy eating.

“We all want to connect local food to local families,” said Brennan Meagher, director of local agriculture programs at Augusta. “We’re so excited about how we’re going to be able to do this at the HUB in this space.”

Both buildings are scheduled to open to the public in June. A grand opening event will be announced later this summer.