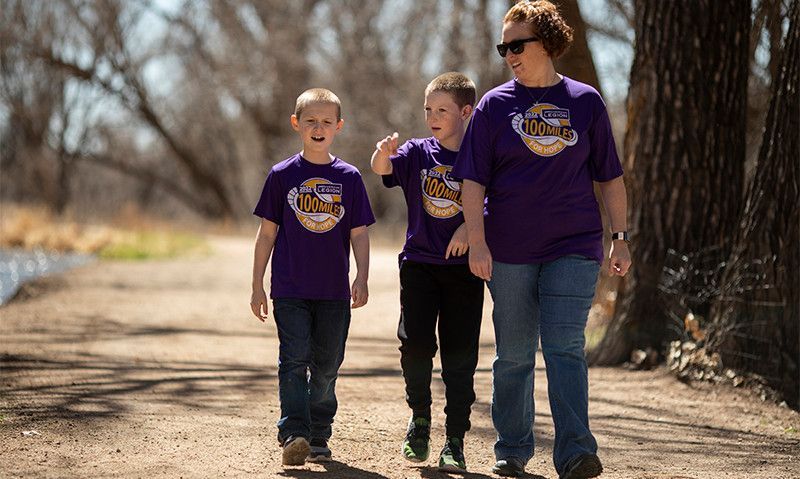 Generations bond on 100 Miles for Hope

The King family rivalry pitted grandsons against grandfather in a bid to be the first of their clan to walk 100 miles.

10-year-old Michael King and 9-year-old Will King are both life members of the Sons of The American Legion (SAL) and face off against their mother, Legionnaire Mindy King; their grandfather, SAL member Michael Saindon; and their grandmother Kathy and aunt Tracy Saindon, both auxiliary members. Mindy is an Army veteran and her husband, Will, is an active duty military member. The family is based in Colorado Springs, Colorado.

This is the family’s second time participating in 100 Miles for Hope, a fitness/wellness event in which participants walk 100 miles before Labor Day as they raise money for the American Legion Veterans & Children Foundation. All proceeds from registrations and donations go directly to supporting disabled veterans and military families. (Learn more and register for the third annual challenge here.)

The family’s first competition was an upset.

“The biggest shock was when my dad beat the boys to his 100 miles,” Mindy said. “And the boys were blown away by (their) grandfather. … It also prompted us to get them watches with trackers for all the random runs they do.

They had only counted their kilometers on outings and walks – not while playing.

“So when it came up again, the boys asked, ‘Are grandma and grandpa going to do it? “We have to beat Grandpa this time.”

The family uses a spreadsheet that Michael Saindon created with each of their names and miles.

“It shows who’s ahead,” Mindy said.

“It’s always great fun to compete with our grandparents and with our aunt,” said Michael King.

Will they beat their grandfather this year?

However, fundraising is collaborative rather than competitive.

“People are definitely more willing to donate to boys. They kind of have that cuteness factor,” Mindy said.

Competition aside, an important aspect for Mindy is the ability to connect the generations — the Saindons live in Kansas — while the Kings are hundreds of miles away.

Mindy and the boys walk miles around the neighborhood on some days, and the event gives the family a great reason to get out and see Colorado’s many state parks – free for those with a Colorado license plate. disabled veteran.

“The reason I want to do (100 Miles for Hope) is because we can actually go out to different parks and walk on different trails,” Will said.

As an Army veteran married to an active duty military member – they have seven combined deployments – Mindy has seen how unexpected hardship can leave military families in financial holes.

While stationed at Fort Riley in Kansas, a young bi-military family “lost everything” in a house fire, she said.

“Insurance was giving them a big sleight of hand,” she said, so she contacted her hometown post in Derby. Within a day, she received a check “just to get them started.”

Mindy said the insurance would eventually cover much of what was lost, but in the meantime the husband was awaiting deployment, the wife was preparing to go to the National Training Center and all their gear was gone. When Mindy handed over the check, she said, the woman “… broke down crying because… it was an immediate response. This was not a request that took two weeks to process.

“I’ve seen how organizations like the American Legion can help in these circumstances, without having to go through all the bureaucracy. This is huge, especially for our military families or those who have served, who can find themselves in a sudden and difficult situation.

As a former non-commissioned officer, Mindy understands the importance of caring for soldiers while they’re on duty and after they’re discharged, a lesson she teaches her two boys as part of their home school program. .

“With what we have been blessed (with), we have the ability to bless others. It’s something that’s very important for them to continue, for me, as they get older,” Mindy said. “All it takes is one person to do something to make a difference for someone. … Making that little hiccup in a path for someone who can adjust the path and can completely change things in ways you may never know.