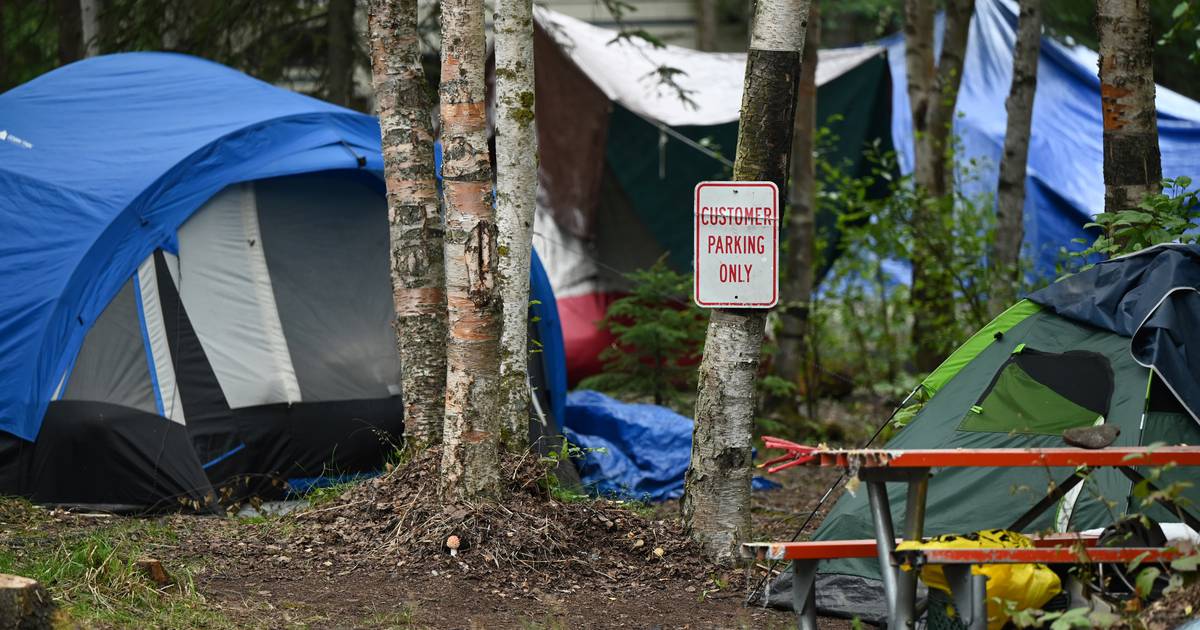 Anchorage residents, social services and community groups have sprung into action to try to fill gaps in services at Centennial Park Campground, which were left after Mayor Dave Bronson’s administration closed the Sullivan Arena mass shelter in June and directed homeless residents to the park. .

But because the Bronson administration doesn’t treat the East Anchorage campsite as an official response to homelessness, there hasn’t been much coordination or a clear path for ad hoc groups trying to help the roughly 200 unsheltered residents of the campground.

Some say they were stymied and, in some cases, frustrated when they didn’t see the donations go immediately to campers, or when they turned away from serving hot food to campers.

And for many organizations providing services and outreach to unprotected Anchorage residents, the lack of a coordinated and official response to homelessness in Centennial has deterred them from sending staff to the campground for safety and liability reasons.

“It’s like a powder keg,” said Anchorage social worker Julia Terry. She voluntarily collected and distributed to Centennial residents about 100 kits containing Narcan, a life-saving opioid overdose reversal drug, and trained about 50 campers in its use. But Terry said she wouldn’t direct staff or colleagues to do outreach at Centennial.

“It’s about employee safety and the ability to be able to respond appropriately,” she said. “If we had a people support system in place, if people could engage with outreach teams like they could in other parts of our homeless response system, then I think that would be another matter.”

There are a few hundred people from all walks of life concentrated in an area with few resources. Some have a history of violence and others have been victims. Many campers have substance abuse disorders or untreated mental health issues, or both. With little or no supervision from trained social service personnel, it’s a dangerous situation, Terry said.

Bronson officials said the campground will likely remain a sanctioned camping area through September. In mid-July, the Salvation Army stepped in to help, on its own and without a contract with the city, to run the campground. Two Salvation Army social services staff are now on site Monday to Friday. They say they are doing their best to coordinate services, including food and donations. They are also working to find shelter or more permanent accommodation for the people there.

[No place to go: Anchorage’s homeless shelter capacity has been pushed to the brink]

“We are here to help customers, we try to coordinate efforts, but we are in no way the controlling body of this campground,” said Natalie Clendenin, spokeswoman for the Alaska Division of the Salvation Army.

Kendra Arciniega, a local filmmaker, organized efforts to make and deliver sandwiches, snacks and supplies to Centennial campers. She is angered by the Bronson administration’s refusal to have Centennial part of its response to homelessness and the conditions she witnessed at the campground, she said.

“If this isn’t an official municipal response, then why are you policing the community’s self-help efforts? Big question mark for me,” Arciniega said.

Duke Russell, an entertainer from Anchorage, regularly served hot homemade meals to campers until Monday, when city and Salvation Army staff said he could no longer bring food there, said he declared.

“When I started, there was no one around. There was absolutely no one around. No one cared. I went there 15 times before they arrested me,” said Russell.

He prepared the fresh food in the morning and transported it to the campsite on the scooter. He served it hot at a campsite that served as a resource center and safe zone for campers, run by volunteer Roger Branson, chairman of the Houseless Resources Advocacy Council.

Bean’s Cafe, a local soup kitchen, is on hand to serve essential food, providing three meals a day, and coordinating food efforts with the Salvation Army.

Russell said he was there to provide an additional, healthy and often vegetable-based option for campers. He said it was a way to show unconditional support for people who are hurting, to serve food with love, compassion and dignity.

But once in the previous week, and again on Monday, a Salvation Army staff member and a city parks and recreation employee told Russell and Branson to stop serving food. They had concerns about food security, liability and concern for his own safety in the camp, Russell said.

In an email, the mayor’s office said there were no city rules prohibiting food sharing among Centennial campers and there were no requirements for community volunteer efforts, but that he asked that individuals and groups coordinate with the Salvation Army.

Clendenin said the concern is that, without coordination and oversight, Russell’s effort could potentially pose food safety issues for campers, such as serving contaminated food or inadvertently spreading disease. The Salvation Army asks people to be respectful and responsible, but not pushy, she said.

“We are not an executing agency, so if he chooses to cook, and for a large volume, at the campsite, it is his responsibility to ensure safety if he chooses not to coordinate with the Salvation Army or Bean’s,” Clendenin said. “We, ourselves, must follow the health department food safety laws. It’s an open campground and if people want to eat what he cooks, they can.

Another problem is that at times the donations, while well-meaning, have been less than helpful, Branson and Salvation Army staff said.

They received electronics, half-used toiletries and questionable food. That’s why the organization is asking community members to coordinate donations and other efforts with The Salvation Army, Clendenin said.

“What’s a homeless man going to do with a head of iceberg lettuce?” Branson said. “No way to wash it, make it into a salad, and nothing that goes with it.”

Russell returned Thursday morning to Centennial with an easel, canvas and paintbrushes. Rather than bringing food, he spent his time making paintings depicting the campground.

The Salvation Army currently needs volunteers who have a health care or social service background, but is considering taking volunteers over the age of 18 to help with its Centennial efforts, Clendenin said.

Capt. Denise Delgado, director of social services for the Salvation Army in Anchorage, is at Centennial on weekdays, gathering information from campers and entering it into Alaska’s homeless management information system. The system is a key step for visibility and connection to service agencies, and eventually – hopefully – finding placement in shelter or housing.

The process is slow, Delgado said. There are currently no low-barrier shelter spaces available in Anchorage, the rental market is scarce and expensive, and private shelters are largely full, with waiting lists.

While the Salvation Army provides important services within its means, other informal volunteers have also found themselves in the position of providing urgent assistance, including life-saving emergency care.

One evening at the end of last month, Arciniega said that she and a group of volunteers walked from campsite to campsite, dropping off supplies and checking on people.

They administered Narcan twice during this trip, she said – once to a person they found passed out in a shower, who was later resuscitated, and again to a person they were found unconscious in a tent. That person was then taken by ambulance for emergency medical treatment, she said.

Volunteers found people sleeping in dirty bathrooms to protect themselves from the rain, she said. They found a broken and overflowing toilet with no toilet paper, she said.

When asked why it does not view the campground as an answer to the homeless, the mayor’s office said in a statement, “The Municipality of Anchorage is actively working with community partners to place people on a daily basis. in shelters, services, treatment and permanent accommodation. These efforts, which include setting up the Navigation Center later this year and providing other shelter/housing options, will continue as long as there is a need in our community.

Felix Rivera, Assemblyman and Chair of the Housing and Homelessness Committee, said the situation in Centennial won’t improve until the administration calls it an answer to homelessness and “will align the municipality’s efforts with reality”.

This would allow the Salvation Army or the Coalition to End Homelessness to coordinate on-site services, control perimeter, entry and exit, and implement structure, personnel and rules typically seen in low barrier shelters or sanctioned campgrounds that have existed. in other states, he said.