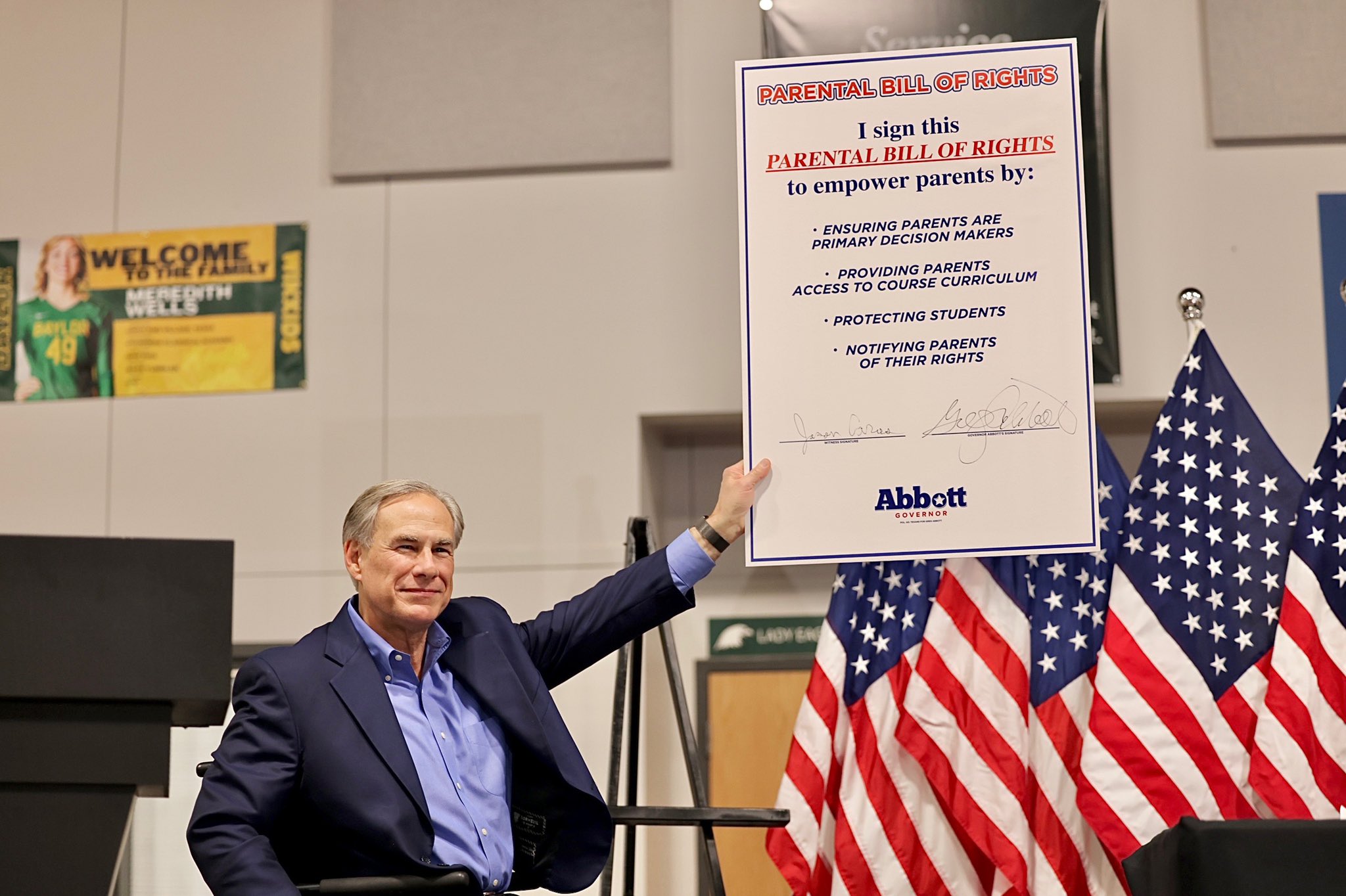 Education advocates are speaking out against a “Parents Bill of Rights” that Governor Greg Abbott plans to pass if he is re-elected. The bill, which the Texas governor signed shortly after unveiling it at a campaign event at a Lewisville charter school on Thursday, would amend the state’s constitution to “clarify that parents are key decision-makers in all matters involving their children”.

Under my Parental Bill of Rights, we will amend the Texas Constitution to reinforce that parents are the primary decision-makers in all matters involving their children. pic.twitter.com/z64eobbk7Y

The proposed bill that would allow parents to decide whether their children should repeat failed classes and potentially put teachers on a “do not hire” list for providing students with material deemed “obscene” by the state. However, education advocates argue that the legislation is unnecessary since the Texas Education Code already contains a chapter that outlines the rights and responsibilities of parents and such a bill will only lead to a additional censorship in schools.

Here is Governor Greg Abbott’s “Bill of Parental Rights.” This is distributed at his campaign event at a charter school in Lewisville. #WFAA #txlege pic.twitter.com/uG60yQR3u9

Shannon Holmes, executive director of the Association of Texas Professional Educators, released a statement Thursday following Abbott’s announcement, saying “the so-called ‘Bill of Parental Rights’ would not give new rights to Every “problem” is already addressed in existing state law and local policy. Instead, Governor Abbott’s pledge to “strengthen” parents’ rights would only serve to impose mandates additional government to school districts and teachers already stretched to their limits due to understaffing.

Holmes went on to say the legislation would do nothing to improve public schools or strengthen parents’ rights and urged voters to compare their personal experience to the governor’s rhetoric to make their own judgment.

“Parents and educators are partners in a child’s learning, which is already reflected in our state’s education code and the day-to-day practices of school districts across the state,” Holmes said. . “This proposal reeks of grandstanding and only serves to turn our students and teachers into political pawns.”

Chapter 26 of the Texas Education Code titled “Parental Rights and Responsibilities” outlines the rights to which parents are entitled, including access to student records, educational materials, state assessments, and school board meetings. “Parents are partners with educators, administrators, and school district boards in the education of their children,” the code says. “Parents should be encouraged to actively participate in the creation and implementation of educational programs for their children.”

Texans -watch out- @govabbott is pursuing this plan to allow educators to have their degrees and teacher retirement benefits withdrawn for providing pornographic material to minors. Certain to be chilling. Librarians are NOT pornographic governors. #FLedom pic.twitter.com/8QUZ05oSXn

The #FReadom Fighters, a grassroots effort led by Texas librarians fighting book challenges in the state, took to Twitter to warn educators of a potential chilling effect of the bill. “It’s not a law – it’s @GovAbbott’s proposal as a gubernatorial candidate, using school libraries as a trigger to garner votes,” the group said. “We protest this disrespect for dedicated professionals and stand with #FReadom students, as does the Supreme Court.”

While some leaders focus on political scoring in the name of a “parents’ bill of rights,” we’ve been creating genuine family engagement with students, schools, and families for years. Check out our 🧵 below to learn how and why we do it. #txlege #txed https://t.co/HjfykAfqId

The Intercultural Development Research Association, which has previously denounced the bills critical of Abbott’s racial theory, called the bill an effort to prevent students and teachers from learning the hard truths of the country and to use parents as political instruments. IDRA also outlined ways for parents to engage authentically with schools.

While some leaders focus on political scoring in the name of a “parents’ bill of rights,” we’ve been creating genuine family engagement with students, schools, and families for years. Check out our 🧵 below to learn how and why we do it. #txlege #txed https://t.co/HjfykAfqId

“For students to feel a connection and affinity with this country, they must learn to grapple with its painful history, to see the beauty and value of the diversity of its people, and to recognize all the work that still remains. to do to make our democracy better,” said a statement released Thursday by the IDRA. “Students, their families, and their communities benefit from schools that provide truthful and culturally sustainable programs.”