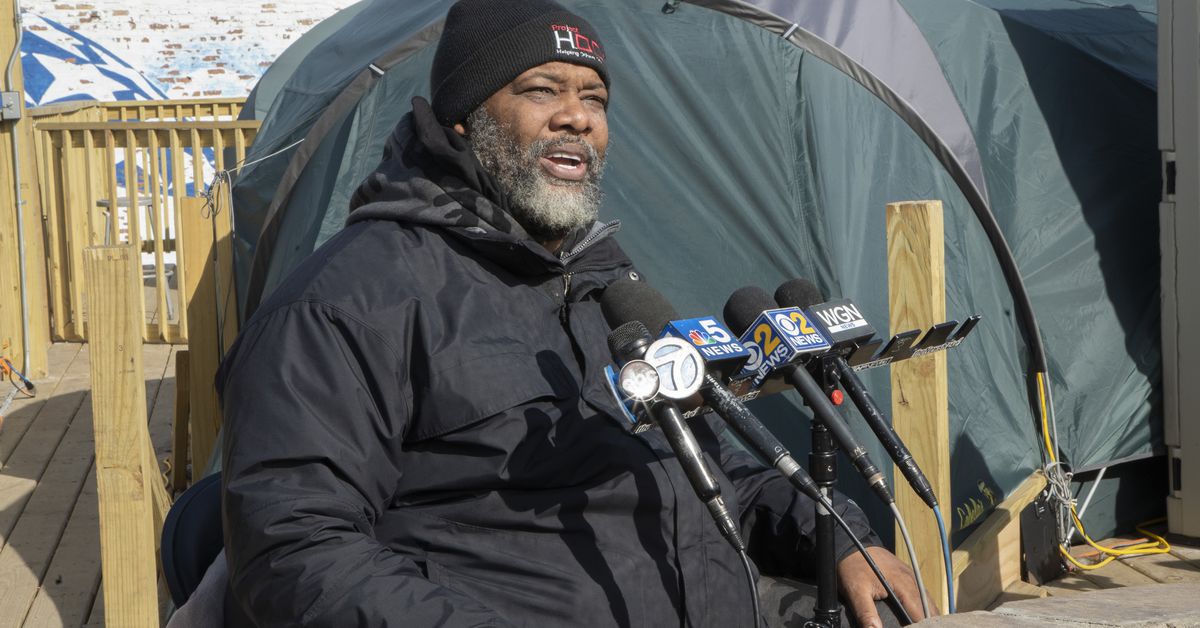 Corey Brooks will stay out to fight gun violence

For 100 days, Pastor Corey Brooks camped atop eight storage containers. His goal was the same as when he sat in a run-down motel 10 years ago: to draw attention to the violence and poverty of Woodlawn.

Monday was supposed to be Brooks’ last day sleeping in the freezing cold at 6615 S. King Drive. Instead, Brooks announced that he would extend his 100-day anti-gun violence camp “indefinitely.”

“I’ve been feeling in my mind for about a week, ‘Maybe I shouldn’t come down,'” Brooks explained. “I have a lot of hope that if I stay longer we can hit the mark.”

That mark is $35 million for an 85,000 square foot resource center for community meetings, food distribution to those in need, and even an educational wing. So far, $10 million has been raised.

Brooks, pastor of New Beginnings Church on South King Drive, said he had not requested any specific assistance from the city, such as through Mayor Lori Lightfoot’s Invest South/West initiative, but had invited Chicago-area CEOs to camp with him.

Michael Paulsen, senior vice president of Lockton Companies; Thomas Jonas, CEO and co-founder of Nature’s Fynd; and Cubs co-owner Todd Ricketts were among those who joined the CEO Challenge.

“We were able to reach an area of ​​people that probably wouldn’t have supported Chicago’s South Side,” Brooks said.

Still, extended camping comes at a cost. Brooks and his guests sleep in tents, cook their food over a fire pit, and use heaters to keep out the freezing cold. He has already missed important events, such as the funeral of the wife of one of his church founders, and could potentially miss the birthdays of his two daughters in March and April.

“That’s the burden,” Brooks said. “It can wear you down and tear you apart.”

But he said he sees his own pastor and therapist every two weeks to stay “spiritually balanced”.

The effort will be worth it in the end, he said.

“You can never do enough when children are dying,” he said. “When people don’t have safe spaces to go to; when individuals do not have the opportunity to move on with their lives, what more should we all do? »

Donations for the Brooks Center can be made by projecthood.networkforgood.com.

Cheyanne M. Daniels is a reporter for the Chicago Sun-Times via Report for Americaa non-profit journalism program that aims to strengthen the newspaper’s coverage of communities on the South and West Sides.