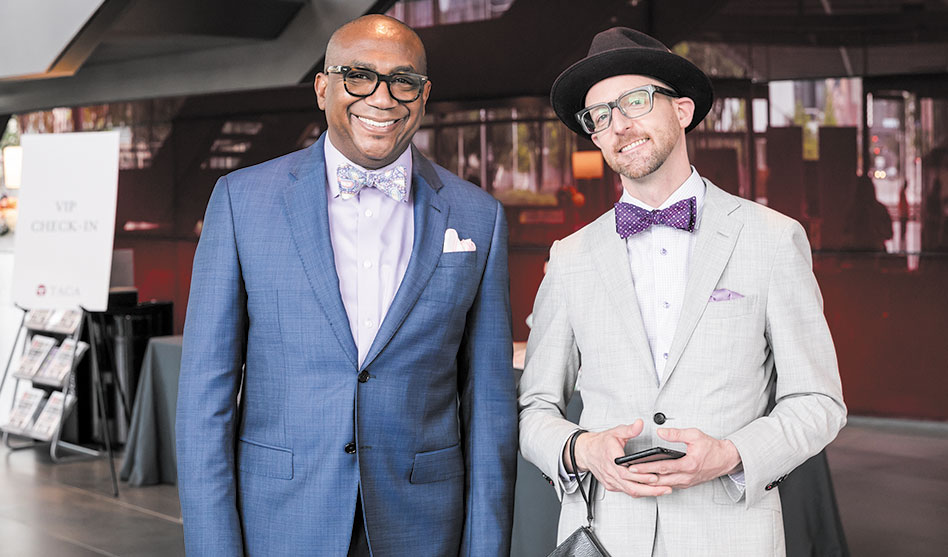 A passion for the arts, defense

Serving Dallas and its communities, Terry Loftis is the man

Terry Loftis’ daily schedule is not at all envious. For this interview, he pulled over and sat in his car for over an hour to talk about local arts, the LGBTQ community, and sometimes his own personal life. And it was our scheduled time to talk before his next date.

A busy schedule is his day to day and honestly he seems pretty good with it.

The Dallas Morning News featured Loftis in 2020. The article chronicled how Loftis grew up in Oak Cliff and returned to Dallas. And yet, there was still so much to say.

For this interview, Loftis addressed equality, diversity and inclusion (EDI) in the Dallas arts landscape. He explained the value of working within his various communities and leading by example. And we talked about the future and his vision for both the local arts scene and the philanthropic community, with a particular focus on LGBTQ issues.

His close friend Cordey Lash apparently encompassed Loftis’ attributes in one sentence: “Whether it’s health disparities, career advancement, artistic excellence, or simply bringing together the best of the best for the benefit of the community, Terry Loftis brings honor to the Dallas community through his purpose, compassion and integrity. [He is] truly one of the best philanthropists I know,” Lash said.

Looking ahead, we’ve backtracked to October 2021:

A formal affair
Last year’s Black Tie Dinner was a record-breaking effort for Loftis. He described it as biting “due to being the first person of color to co-chair the event.”

The evening was a massive night at the downtown Sheraton. While BTD still draws a crowd, the pandemic expiration seemed to give it a bit more energy.

People were looking forward to going out and having a fancy evening party at this fundraiser which serves a number of LGBTQ organizations in North Texas.

For Loftis and the rest of the board, however, the preparation has been daunting.

“The excitement and the pressure of putting it together is not something that I think the public is fully aware of,” Loftis said. “Most of it is run by a volunteer board of directors. It’s a lot of work, but it’s a lot of fun. »

The dinner was in its 40th year, and for Loftis, he said, it was a privilege and an honor to serve as co-chair of the event after spending time on the BTD board.

But it also put him in the spotlight in a way that wasn’t quite comfortable.

“Despite the press, I’m generally shy by nature,” Loftis said. “I spend a lot of time in the background, but as my career progressed, I needed to be more in public. I had to suck it up and kiss it, but also, I’m very proud of the work I do for Black Tie.

The dinner was suitably fabulous, but moving forward, there’s more. in his eyes, to put an end to the organization both in its influence and in its composition.

“I want us to ensure that every aspect of Black Tie as an organization resembles and represents the community we serve, from our beneficiaries to our board of directors and our community involvement,” he said.

Loftis exposed criticism that the organization is too white and non-inclusive, as well as criticism of its transparency. As senior co-chair, he has seen progress in BTD and diversity. The board is working strategically on the planning process that looks at the demographics of the diner and expands it.

This brings us back to his talk about representation.

“What are the things we need to let go of and change? ” He asked. “We want to look at ourselves from the perspective of the community as a whole. What can we do other than just write these checks to our payees.

“We are looking carefully at areas such as fundraising, development, our board, initiatives and programs that will help us be a true partner to these grantees.”

In today’s societal dialogue, Loftis added that it has to be more than optics, more than just ticking a box. That alone, he said, is offensive and wrong.

For him, it is up to the organization to advance the missions of its beneficiaries and their causes. But it’s not just Black Tie.

State of play
The Arts Community Alliance (TACA) is a long-standing organization in Dallas that works to support arts organizations in the area through grants. Its distinct mission is “to support excellence and impact in the arts through grantmaking, capacity building and thought leadership,” states the organization’s mission statement.

Loftis joined the organization as a director in 2019.

“Terry has done an amazing job raising money for TACA which basically benefits the entire arts infrastructure in Dallas. He is a relationship builder and is also creative and enterprising in finding ways to connect with funders and beneficiaries,” said Kim Noltemy, President and CEO of Ross Perot of the Dallas Symphony Orchestra.

The organization has been around for nearly 60 years serving the arts in Dallas, but those pandemic years have really put TACA to the test. When businesses and organizations closed at the start of the pandemic in 2020, they also lost any income that would simply help keep the organization afloat. TACA was going to be their buoy.

“It was total madness at the time,” Loftis said. But they persevered. Thanks to their efforts as well as vaccinations, the arts keep coming back.

These days, however, Loftis is looking at the arts with a different eye — or at least, one that isn’t as distracted by the pandemic.

“There is systemic racism in the cultural arts here in Dallas,” he said. “We looked at various institutions and their policies and who they work with. I don’t think it’s intentional, but through EDI initiatives, it’s our job to bring these issues to light and be the most authentic ourselves first to address the issue.

It is his vision.

He sees an artistic community that is woven together, all working towards the same goal of EDI.

“In this path, these negative attributes can be opportunities for acceptance and love,” Loftis said. “It is imperative for us to encourage principles and practices that do not violate others. We need to show younger generations that we stand for equality and inclusion at all levels.

It’s so edge
TACA and Black Tie can take a long time at Loftis, but why stop there?
Loftis is also a board member of the Dallas Symphony Orchestra, Dallas Arts District and Texans for the Arts. He is a member of the Dallas Assembly and has served as Chairman of the Board of the Resource Center and a member of the boards of Friends of the Katy Trail, TITAS, USA Film Festival, The Dallas Way and Legacy.
Take it easy? Not this guy.
“I really had no intention of getting so deeply involved in the community. It really happened,” Loftis said. “I will say Resource Center is probably the only nonprofit in Dallas, other than TACA, that has my heart and soul.”
He’s been a volunteer with the organization for 20 years, and he finds it crucial to be immersed in the LGBTQ community in this way — or perhaps his way.
When he came out, Loftis said, he didn’t see a lot of black and Hispanic people working in the community. He added that not too long ago the community didn’t understand trans issues very well.
We all need to see ourselves as part of the family, he insisted.
“At the end of the day, I want to be useful and primarily in the community,” Loftis said. “These organizations are important to me, and supporting them is not just about dollars raised, but boots on the ground to help them do what they do best.”
But sometimes – in the midst of all his work, his commitment to the board and his philanthropic responsibilities – he just focuses on getting home at a decent hour with his partner John.

Here come the newlyweds
On top of everything else, Loftis still has a wedding to plan. He’s still mom on it right now, just to keep some privacy at this point. But in addition to his job and volunteer duties, he and his fiancee are working on their special day.

John is a stylist at Nordstrom’s. The two have been together since the summer of 2019 and both have busy work schedules. Loftis described a recent “regular” night for the two:

“I left the office around 4:30 p.m. I went home, I went to the gym. We had dinner and spent the evening together,” he said. “It’s the anomaly! I would say on a normal night one of us goes to get dinner, depending on who gets home first.

When he has time, Loftis tries to decompress — if he’s not opening his laptop to get back to work or catch a long BTD board meeting. He enjoys reading, and he and John enjoy entertaining and spending time with their friends. John sometimes has to serve as the couple’s social planner.
“Most of the time we have to have a plan ahead of time, but the spontaneous moments, if possible, I love,” Loftis said. In fact, he started the relationship when he was also joining TACA and a pandemic was looming.

And he wasn’t even looking for a relationship.

“I wasn’t,” Loftis said. “I’m not a spring chicken, but I’ve never dated someone who fit so easily into this vortex of my existence, and they do it from a very individual standpoint. They know when and how to put me in my place, which very few people can do, and from the relationships that I have had, he is my equal.

But it’s John’s sense of humor that really makes an impact: “He’s probably the most caring person I’ve ever met, but apart from that and finding him adorable, it’s his ability to crack me up. I love to laugh and if someone else can make me laugh that’s huge.

While he’s technically working through this interview, maybe Loftis has some free time to just talk and reflect on the ideas, goals, and people he likes. He lives this great life, and much of it is in service to others – the arts, the city, the community, her future husband.
When he looks within, he is simply grateful.

“I’ve been extremely blessed with an incredible life and an interesting career. It hasn’t been a boring existence,” he said. “At the end of the day, I want to be in service and be authentic. These opinions are mine.

“If by virtue of who I am [I do something to] inspire someone to get involved and make a difference, or if my presence helps in any way, that’s motivation. I think I’m physically and mentally capable, I’ll keep doing what I can until I’m gone.