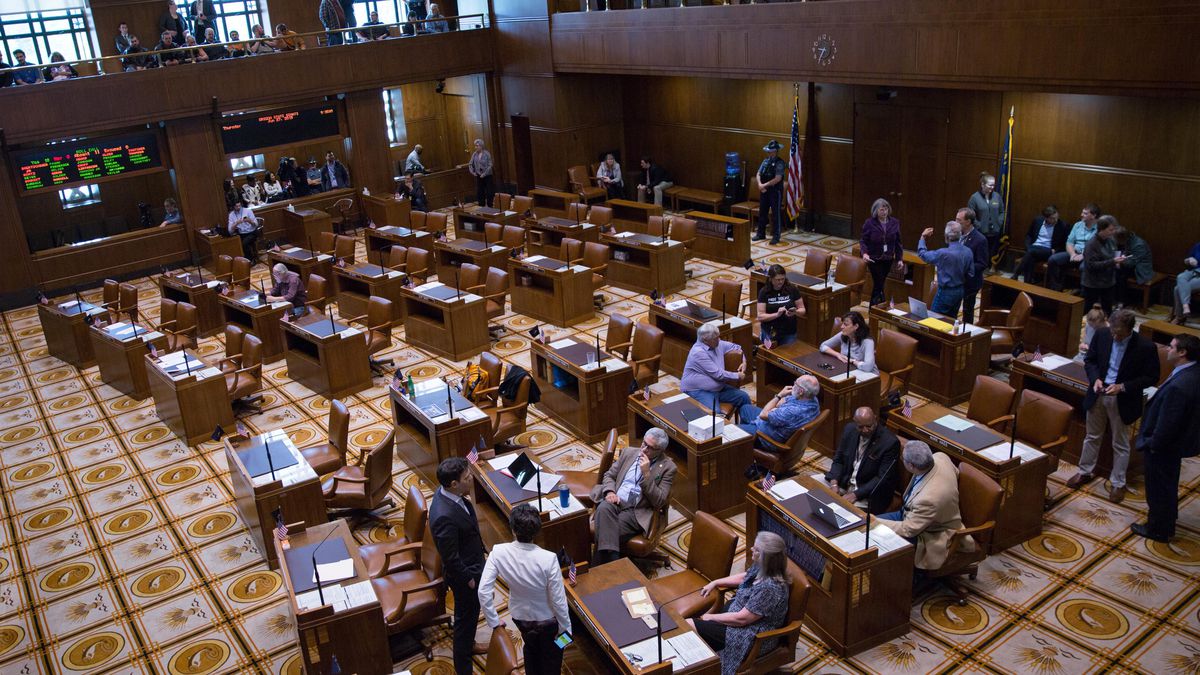 When Oregon Republicans blocked climate change legislation fleeing the state in 2019 and 2020, the state’s public sector unions were among the most vocal critics.

Now these unions are spending heavily on an election measure that would severely limit the minority party’s ability to use this so-called nuclear option in the future. Under the proposal, a legislator who is marked not excused by the speaker of a house 10 or more times during a single legislative session would be barred under the state constitution from seeking re-election.

Proponents of the Initiative 14 petition, dubbed “Legislative Accountability 1,” announce on Friday that they will submit the final batch of signatures needed for their proposal to be voted on in November. Supporters plan to deliver a batch of nearly 58,000 signatures to the Oregon secretary of state, they said, giving the effort a total of more than 183,000 signatures.

To qualify for the ballot, state election officials will need to determine that at least 149,360 of those signatures are from registered voters in Oregon.

“It’s high time there were rules in place to make sure politicians show up to do their job,” Oregon Education Association president Reed Scott-Schwalbach, one of the two main petitioners. “The Holding Politicians Accountable measure will ensure that there are finally consequences for politicians who violate their oath of office and desert their posts.”

Excused absences are fairly common in Salem, with lawmakers filing requests with presidents explaining why they can’t attend. They are not granted in the absence of the legislator to block the legislation.

Landing a measure on the Oregon ballot isn’t cheap in the age of COVID-19, where signatures are hard-earned and hiring people to circulate petitions is expensive. Time and again over the past few years, ballot measurement efforts have proven unable to garner enough signatures to submit a proposal to voters.

This year, the walkout measure appears to be the only initiative petition with a chance of making it to the ballot box.

Earlier this month, grocers announced they were dropping a ballot measure to allow liquor sales in grocery stores, saying they couldn’t collect enough signatures in time. And a proposal to ban high-capacity magazines and require gun buyers to obtain permits is racing to garner tens of thousands of signatures before a July 8 deadline. Supporters acknowledge they face a difficult task, but hope the recent mass shootings in Texas and New York will give voters the urgency to sign up.

Oregon’s three largest public sector unions – the OAS; Service Employees International Union Local 503; and the American Federation of State, County and Municipal Employees Council 75 – countered those headwinds with money. Campaign finance records show that a political action committee affiliated with the petition has spent nearly $1.6 million since last year, with most of that money going to petition distributors.

“We haven’t been able to resolve this legislatively for obvious reasons — they would probably back down if we tried to send something back,” Wagner said in a text message Friday. “So I’m following the example of the community advocates who put forward this proposal.”

Wagner does not speak theoretically. When he held a committee hearing last year to consider bills that would create walkout penalties, Republicans declined to attend.

The impetus for the measure is the result of Oregon’s atypical quorum rules. While the majority of states allow legislative chambers to conduct business if a simple majority of members are present, Oregon is one of the few that require two-thirds of the legislators to be present.

This high bar has been used as a legislative weapon by both parties over the decades. The Democrats left the Capitol in 2001 to thwart the maneuvers of the majority Republicans on the reshuffling of political maps. And since 2019, Republicans have repeatedly refused to show up for floor sessions in order to block various Democratic priorities.

More significantly, House and Senate Republicans fled the Capitol in 2020, successfully pushing through a bill that would have regulated carbon emissions in the state and forcing that year’s legislative session to s to adjourn with only three bills passed.

Democratic allies vowed to do something to stop the walkouts after the 2020 session. They first formed a PAC called No More Costly Walkouts that paid for ads and direct mail against vulnerable Republicans who had walked away from the Capitol. One of the targets, former state senator Denyc Boles, R-Salem, failed to win re-election in 2020.

But when it comes to actually changing Oregon’s law, progressive groups haven’t pursued the easiest option: changing the quorum rule from two-thirds of a house to a simple majority of members. .

Instead, they came up with 10 potential ballot measures last year, each including a different combination of consequences for walkouts. These included $500 fines for unexcused absences and tinkering with legislative deadlines to prevent lawmakers from being able to miss a session’s time by leaving.

The coalition said it would pursue a measure it could convince voters to support. They say IP 14 turned out to be the easiest.

“Oregonians get it on the face of it,” said Joe Baessler, associate director of AFSCME Council 75. “You don’t show up for work for no reason and you lose your job like everyone else. It makes it super popular and fair, and so it will pass.

Proponents of the measure said polls suggest 84% of likely voters this year are likely to support their proposal.